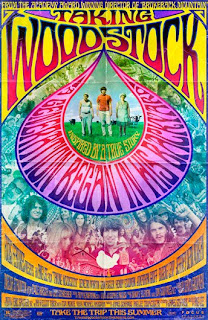 Seeing "Taking Woodstock" was a spontaneous decisions- I've had it for a while, but didn't get around to seeing it, so today, when I was trying to get away from university assignments, I said, "Why not? Summer is almost here". What can I say after seeing it? I want to go to a festival; sit on the grass, talk to people, listen to good music, take photos- I just want to enjoy life together with the people around me. Damn it, the hippie vibe got to me, I think I would have been pretty happy in the 60s right?

Taking Woodstock is an Ang Lee movie about Elliot, a young man who returns to his hometown to take care of his parents and their endangered business (a motel). After he learns that Woodstock might not be happening that year because of land problems, he decides to call Michael Lang, one of organizers, and propose to him to move the festival to his town. The rest of the movie basically shows you the backstage of what happened in the festival, the ups and downs, the people and the atmosphere of Woodstock, something that is still being talked about. I do believe it is a golden era, in some aspects, and I would go back in time to experience it, even just for one day.

The film featured a big cast, from people like Eugene Levy (the owner of the land), to Jeffrey Dean Morgan, Jonathan Groff (Michael Lang), Emile Hirsch, Paul Dano and Mamie Gummer. My favorite characters were played by Liev Schreiber (the out-of-nowhere drag "bodyguard") and Imelda Staunton (Elliot's mother), in a hilarious, yet very good role. Demetri Martin, the lead actor, offered a pretty approachable and sweet performance, and blended it perfectly with the rest of the cast. 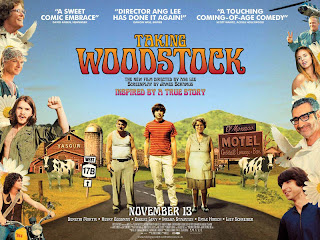 Script-wise, it wasn't the best, but overall, I think it made its point. Yes, there are some shallow characters, some undeveloped ideas and some cut in, cut out scenes, but I still think that, for what it was aiming to do (re-create Woodstock in some way or another), it did a good job. The cinematography and direction were also on point, although I must say I was amazed by the number of extras they had- how did they control them or give directions? Visually, one of my favorite scenes has to be the acid trip Elliot has while being in a hippie VW Beetle wagon- I loved the waves to the stage and the colors used, I could see and understand how something like that must feel.

"Taking Woodstock" might not be perfect, but I personally enjoyed it- it set up a great mood and atmosphere, it was visually beautiful, with great music and  it came from a script which had fun moments and wacky, yet relatable characters. You should really give it a try next time you're in the mood for something light!
Posted by Diana at 10:23 AM