If it's not bad enough that I don't watch as many movies as I should, now I don't write the reviews fast enough. So, I decided to do something different today while I do my post on Once[2007] and see another movie.

Here are some random recommendations for you!


Song1: Somebody that I used to know- Gotye; lately it has received a lot of attention from TV shows (Glee, The Voice USA), but don't be fooled by it! The song is simple, yet very cool; I love the rhythm of it- it's been on my playlist for a long time!


Song2: If You Wanna- The Vaccines; currently popular British band with a cool sound and catchy tunes. Check this out and if you like it, try Post Break-up Sex, as well!

Band: The Maccabees- I discovered them by mistake while browsing Tumblr, but I am now slightly in love with them! I could describe their sound to be pop-rock, or indie, similar to Arcade Fire or Artic Monkeys when it comes to their first two albums, but the third one is a true evolution, and it has a more electronic feel to it- still, very good! Seeing them in London in June- twice, I can't wait!
Listen to: Love you better (2nd album), First Love (1st album), No kind words (2nd album), Pelican (3rd album, current single), We grew up at midnight (3rd album-ignore the video, listen to the song) 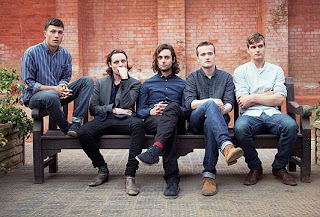 TV Show: Supernatural; I've been watching this for more than 5 years and I still like the characters and the storyline, something which rarely happens in my case. It tells the story of two brothers that hunt demons and other supernatural creatures, but also save the world from different imminent dangers (take Lucifer, for example). The chemistry between Jared Padalecki and Jensen Ackles (the two lead actors) is the main driver of the show and its fans, which are incredibly dedicated- it has a very small, but extremely devoted following! I don't know if it's your cup of tea, but if it looks interesting, give it a try! Trailer for season 4 below! P.S I usually hate horror movies, but I really like this show!


I hope you enjoy them! What have you been reading, listening or watching lately? Let me know in the comments!
Posted by Diana at 2:51 PM

Email ThisBlogThis!Share to TwitterShare to FacebookShare to Pinterest
Labels: April, fans, Maccabees, pick of the day, recommendation day, Somebody that I used to know, Supernatural, The Vaccines, The Voice