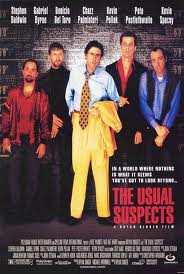 The usual Suspects is a 1995 classic action movie directed by Brian Singer. The storyline follows 5 men [McManus (Stephen Baldwin), Fenstern (Benicio del Toro), Hackney (Kevin Pollack), Dean Keaton (Gabriel Byrne) and Verbal Kint (Kevin Spacey)] who are called for a line-up at the police station- they are the usual suspects in this type of cases, but since they don't have any evidence against them, they release them. While waiting, McManus offers them a job and so, after a couple days, they reunite and plan together a series of events that leads to a mysterious and deadly shooting.

Brian Singer created a great atmosphere for this action packed movie, with close-ups and using music that, in a way, transcends you to 50s gangster movies. The script is well constructed and has many twists and turns, and an abundance of details that you have to be careful to catch in time- people, reasons, lines. After one of the jobs doesn't pan out as it supposed to be, all clues go to Keyser Soze, who turns out to be the one who brought them together for the line-up and who is now calling the shots, blackmailing them all; he is the big bad guy and call me crazy, but I suspected from the first 1/3, maybe 1/2 of the movie, who it will turn out to be and I was right.

The casting is perfect and I love each individual because it brings something different, but necessary to the table. I was surprised to see a very young Benicio del Toro, with a funny, almost non comprehendible accent, and Stephen Baldwin was unexpectedly good, but my favorites are, as expected, Kevin Spacey and Gabriel Byrne. It also has very good supporting roles by Chazz Palminteri, as Dave Kujan, and Pete Postlehwaite, as Kobayashi.

I loved the revealing at the end of the significance of the names- very well treated and developed- basically everything we learned happened to these 5 guys might not even be true. It also has probably one of the best endings I have ever seen: collage of short clips of the movie, revealing some details that one might miss, plus the phrase "the greatest trick the devil ever pulled was convincing the world he didn't exist"..."and like that, he is gone".

All in all, "Usual Suspects is a good, well acted, entertaining movie, with action, fast moving storyline, never-boring characters- I loved it. You should definitely see it, if you haven't already!
Posted by Diana at 10:00 AM