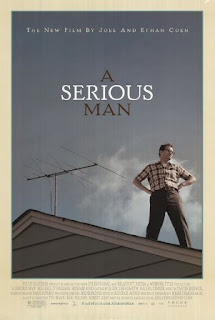 My third choice for the Coens marathon was "A Serious Man", their 2009 film about the complicated life of a Jewish physics teacher. I have to admit I am not familiar with the religion, so forgive me if I make any mistakes....or actually, if I don't touch upon that topic at all.

Let's start with the beginning- what did it mean? why was that scene there? What is the connection between evil lurking a family or superstition and the story of Larry Gopnik? I can see a faint relationship between the two, but still, that scene was unnecessary for me.

The story of "A serious man" is pretty simple: a man burdened with many problems who seem to appear all at the same time, making him feel confused, saddened, desperate and in search of answers, answers which he tries to get from three different Rabbis in age in experience, with no success.  His wife wants to divorce him, although he hasn't done anything wrong and she has already found a replacement; his son is high most of the times and steals money from his sister and father; the daughter is a normal teenager who doesn't give a crap about family or school; one of his students is threatening to sue if he doesn't get a passing grade on his midterm; Larry's brother, Arthur, gets into to trouble because of his betting and other bad habits and the story could continue.

Poor Larry doesn't get a break and I felt for him- I empathized, and I wanted to make everything go away, especially since most of his obstacles were approaching him with high speed and at the same time. How can a person cope with that? You would think Sy's unfortunate ending and Danny's bar mitzvah would make things better, but that wasn't the case. As the first Rabbi said, Larry is "..looking at the world, at (your) wife with tired eyes".

Yet again, the Coens have written a great story with meaning and different layers and subtleties that talk about human nature and life. I loved the idea behind the script, but I felt the ending didn't help too much- maybe that was the point? maybe the ending suggested that these situations don't have an ending and that life isn't easy? My first reaction after seeing it was to be surprised and a little bit angry, as I didn't get it, but now, if I think about it, it does make sense. The two men sure do create weird, yet very intelligent and appealing stories- they're quite special and I love them; in my case, from now on, anything they do, I will see it, as I know I am in for a treat.

Two other great things that I like about their movies are the cinematography and the soundtrack- always on point, always beautiful and appropriate. Also, the casting is amazing each time, they pick the perfect people and I don't know if it makes sense, but it feels like the script and the direction just takes out the best in an actor, it makes them better somehow.

In this film, I loved seeing some familiar faces from my childhood repertoire (movies from the 80s or 90s I used to watch at home, on TV, with my dad), like Richard Kind (Arthur), Adam Arkin (divorce lawyer) or Fred Melamed (Sy). As for the main characters, Michael Stuhlbarg is a class above the others as Larry, the sweet teacher who tries to survive through the "storm"- he was believable, interesting, and I could relate to him; I was a bit shocked to see he wasn't nominated for an Oscar for this role. Another standout was Richard Kind, who played the innocent brother, plus Melamed gave Sy Ableman a touch of craziness that made the role ten times more fun to watch than it was probably on paper.

Overall, I must say I really liked "A serious man" and it's definitely one of my favorite Coen brothers movie. The interesting thing is that each Coen film is so different from one another, especially in storyline, but somehow, each time, it delivers in all points and each one is beautiful and fun to watch. I can't really say which one I like more, they are special in their own way and all deserve attention. I'm very intrigued by these filmmakers, as they are truly distinctive in the cinema world.