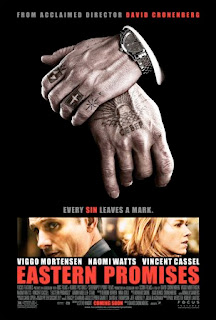 Eastern Promises, my second David Cronenberg movie in a week, is a drama about a midwife who discovers the shocking story of her recently-deceased unknown patient, who gave birth to a child after being raped by a Russian mob man.

To help explain this film, let me just talk about a cake. Just imagine a cake with many layers to it. The first one, on top, doesn't look to good; the colour is too bright, and its taste is rather dissapointing, like they put too much vanilla or rum in the syrup. You get to the second one and it's better: the taste is normal, but still a bit boring and not that good. As you get to the third layer, you find the chocolate, and suddenly you are interested and you want more. The center of it, the caramel, just melts your heart. "Eastern Promises" is very similar to the experience of tasting a cake- the beginning is slow, the English-Russian accents are just plain hilarious and bad, the acting can be over the top, in some situations. Then you get to meet Anna and Nikolai and you start to care, but still it doesn't feel comfortable. When you discover Tatiana's story and Nikolai's actions to spare the uncle or save the prostitute, you understand you are witnessing a character development and the story is becoming more and more interesting. In the core you encounter delicate subjects and shocking revelations, and you start to care about Anna, and the baby and you hope for a happy ending for them and even for Nikolai.

"Eastern Promises" has flaws, even more than "A history of violence", and, as expected, they are similar in some aspects. Both have a running time of less than 2 hours, but seem to last to at least 3 and 1/2. The start is slow and it drags in the middle, but when it hits, it does with such power and shock, that it knocks you down (case in point, the fighting scene in the bath). Both feature strong character, but some of them seem so out of place, so caricaturized, that I don't care as much (Fogarty and Cusack in HoV and Kiril in EP). The obvious flaw that I couldn't stand in "Eastern Promises" was the accent- that is not how Russians talk or act (I know a few); I know it is a movie and they are dramatising the individuals, but it seemed so fake and laughable at times (I liked it more when they were talking in Russian, than the English-with-a-Russian accent conversations).

That being said, some great performances were delivered. Viggo Morgensen was, yet again, very good, and although I did find it hard to believe he was Russian, he embodied Nikolai so well, with such calm, restraint and darkness, that you cannot take your eyes off of him and you even start to care about what happens to him by the end. Another standout was Armin Mueller-Stahl as the head of the family- the sweetest man turned out to be the most ruthless villain and I thought he was brilliant (the only believable character in that story). I didn't empathyze or like Vincent Cassel's character until the very last scene of him, near the water, and I thought he was overacting in most scenes, but I understood him in the end, and sometimes, that matters more than what happens in the first 80 minutes.

"Eastern Promises", is a good movie, but would I recommend it to everyone? Not really, I don't think most would like it. There are too many misses, to really appreciate and love the hits. I liked "A history of Violence" better than this one.

It seems I am in a little Cronenberg marathon, so the next movie I'll see will be A Dangerous Method!
Posted by Diana at 8:52 AM