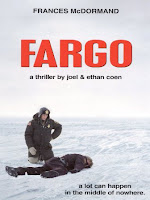 Continuing my mini marathon of Coen Brothers movies, I decided to go with Fargo, one of their classics and another favorite of many cinephiles out there.

It tells the true story of Jerry, a small town sales executive, who hires two men to kidnap his wife in order to get the money from the ransom, so he can pay off his debts. It all goes wrong fast, as the two do more than they are asked to, and the persistency of Marge Gunderson, a pregnant sheriff  from Brainerd, who desperately tries to solve the murders in her town, leads to a bloody, tragic ending.

Again, the best things in a Coen brothers movie are the characters. Each one is unique, with a special spark, or if not with a spark, at least with a loveable trait or flaw that attracts the viewer, like it or not. Jerry (wonderfully played by William H.Macy) is just a sweet, naive guy, with rather good intentions, if you stop thinking about the kidnapping thing for a moment; he never expected this to happen or the situation to escalate so much- it just shows that people should not believe everything they see in movies (a kidnapping never ends well).

Other two Coen regulars take central stage: Steve Buscemi and Peter Stormare (also seen in Big Lebowski and probably others, as well), as the two men who quickly derail off the plan and start shooting people. Although you would think Carl is the slower one, the more reasonable guy, by the end you see he is bad to the bone, but just prefers to keep it calm most of the time. Gaer, on the other hand, is a ruthless killer and isn't afraid to show it or, just I say, not show it. Both gave good performance, although I was more impressed by Peter Stormare; I feel like Buscemi basically plays the same character in almost all his movies, with slight differences.

Of course, the star of the movie is Frances McDormand, who rightfully won an Oscar for her interpretation of Margie Gunderson, a pregnant sheriff who is willing to do anything to learn who are the killers who disrupted the peaceful life of her town, Brainerd. She perfectly mixes the strength and toughness of a cop, with the sweetness and grace of a woman, and most importantly, never gives up and keeps pushing her way through paper work, hookers, phone calls, and uncooperative men. It was so refreshing and surprising to see a woman triumph and catch the bad guy without a kick-ass attitude, stunt work, swearing or mad eyes; she just did her job, in a calm, respectful way, and still managed to come out with the main suspect in hand. I loved that and the more I think about it, the more I love Marge Gunderson as a character: she has spunk, a spark in her eyes, although she is just a simple woman doing her job. Those Coen brothers are amazing in creating memorable individuals.

Another great thing that the script transmitted and I appreciated it, but was saddened by, was the idea of stupidity and superficiality that you can find in small towns like Brainerd or Fargo. These people don't actually think; they go on with their lives without searching for a meaning or asking themselves if what they are doing is the right thing. For them, it's just about putting one foot in front of the other and surviving. Sometimes it makes me go crazy, as I feel they are missing so much, but other times I wish I was just like them. Like Thomas Gray once said, sometimes "Ignorance is bliss". They are just happy in their own indifference and simplicity and you can't argue with that.

Fargo was more serious than Big Lebowski, but it did feature some laughable moments; the number of "Yeah"s spoken during this movie was getting pretty annoying by the middle of it, but I understood, and it gave a sense of reality to the script.

All in all, Fargo is a very good movie, with great characters, a tragic story and a very strong female lead. I really enjoyed it and I recommend it whole heartly! Next Coen movie: A serious man or True Grit (I haven't decided yet)!
Posted by Diana at 9:39 AM