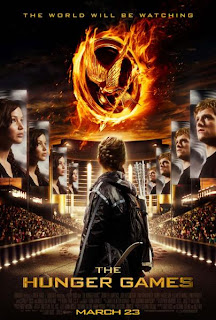 Hunger Games is a trilogy of books written by Suzanne Collins about a dystopian world and a girl who is forced to compete against 23 other kids her age, until only one survives.

Now, I am writing this review of the Hunger Games, firstly, as a reader of the books, and secondly, as a film viewer. Just to let you in on my take of the trilogy, I will say that the 1st novel is very good, it sets the mood, introduces the characters and it's a real page turner; the 2nd one is just as slow at the beginning, but after the 1/3 of it or by the middle, it picks up the pace and introduces great new individuals (like Finnick) and provides another page turning experience- I can't wait to see the film; the 3rd one is very disappointing for me and I do not look forward to watching it on the big screen, with the exception of some scenes.

As a fan of the books, you can understand my excitement previous to the screening of the film- I had heard so many great things about it and I love the casting, so normally, I had rather high expectations. After seeing it, I have to say it didn't fully rise to the occasion, at least not in my eyes.


Now, don't get me wrong- it is a very good movie, well made, with perfect casting, a good visual representation of the story, Panem and its characters, and faithful to the book.

BUT, it did have some weak points that I can't just get over. First of all, the shaky camera- I knew it was a problem because this topic came up in every review I read, so I was aware of it; I agree it was a little annoying at times, although I understand the use of it, mainly to support the idea of reality TV.

Second of all, considering it's a teen movie and especially, after observing the soundtrack list before hand, I thought the music would be amazing, but it wasn't- I don't remember any of the songs; it was mostly orchestral and poorly used.

My biggest problem was the lack of emotional depth....I could not connect with the story or the characters, even if I tried, and that just ruined the experience for me. Script wise, it was very faithful to the book; it added interesting new scenes (especially those between Seneca and Snow), and cut out the unnecessary ones (too many Capitol preparations), but it all felt very robotic, like scene A, switch to scene B....nothing made me cry or have an unusual reaction (the only moments I can exclude from this would be one of the tribute deaths and the cave scene; the second one just because I loved it so much in the book). How can you not transport that raw emotion and excitement that the book transmits from the beginning, to the big screen? Where did Gary Ross mess up? I am very curious- I can't figure out what he did or didn't do to make me jump off my seat or connect with the actor's performances.

Speaking of which, I thought the cast did a great job- I liked every one and not for a second did I think "Oh, that guy is not right for the part" or "They should have gone with X". Jennifer Lawrence delivers the best performance, considering she has the most screen time, and has good chemistry with the two male leads and the girl playing Rue. I, unlike some (or most) critics and bloggers out there, liked Josh Hutcherson, playing Peeta, because not only did he understood the character and portrayed it just like it was in the book, but also because of his charm, sweetness and likability factor. He is not your typical handsome Hollywood star and yes, he is short, but that is why all the girls love him- he is approachable and a genuine nice guy- you will notice that in interviews.  I was pleasantly surprised by Lenny Kravitz as Cinna- not an obvious choice (if you read the books), but very good anyway; another one of my favorites has to Woody Harelson- he just is Haymitch and I can't wait to see him in the other movies, as well. Stanley Tucci stands out as Caesar Flickerman, providing the most laughs, and a special mention must be given to Wes Bentley and his Seneca Crane beard (why isn't he in more movies?).

Overall, I think it is worth spending your money on a ticket, for many reasons:
1.Go with the flow and watch the movie that every one is talking about.
2.It is a faithful adaptation of a great book.
3.The cast is diverse, talented and  provides good performances
4.The capitol and Game center offers a new perspective of a possible world and is interesting to watch
5.Jennifer Lawrence in a role that will propel her to superstar level, and this time, she deserves it (*cough* Kristen Stewart)
6.Move over Robert Pattinson, with your brooding, sad looks- welcome Josh Hutcherson, the sweet, next door guy who will win millions of hearts all around the world with his charm and smile. I heard a lot of people calling him a wuss or stupid or silly, and I understand where they are all coming from, but I also know why little girls will love him. I'm in the middle here!

The book is entertaining, raw and powerful, it offers more emotional depth, and the feeling you get while reading the book is ten times better and more appealing than the film experience. But, I think that a second viewing is beneficial, at least for me- I have a feeling I will like it even more and understand and feel the story better. I never watch a movie in theaters more than once, but I might, this time. Still undecided.

Sunday night, after the first weekend, the box office number are huge- the 3rd biggest opening weekend ever, with over $150 millions domestically and $214 million world wide- it's safe to say we have a new Twilight-like phenomenon, but trust me, this one is worth giving it a try. Coming out of the theater, I realized almost all of the teenage girls were talking and gushing over Hutcherson- at one point, I passed by a group of 10-12 year-old girls who were jumping up and down, sharing their enthusiasm over Peeta.

I'm not saying Hunger Games is amazing and I am not giving it a 10/10- it sure has its flaws, but I do think it can't be missed. Hunger Games, in theaters now!