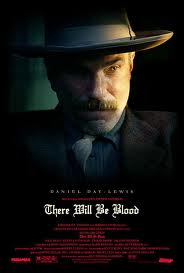 After I saw Little Miss Sunshine last week and was pleasantly surprised by Paul Dano's performance, I decided to watch him in another movie, so this one seemed the perfect answer, as I had it on my list for a long time.

"Ladies and gentlemen", There Will Be Blood is a 2007 written&directed film by Paul Thomas Anderson, about an oilman and his trials and tribulations. Daniel Day Lewis plays Daniel Plainview, a simple, yet very smart guy who works his way into every little town with potential for oil drilling. When he reaches Little Boston, an area suggested by a young, peculiar man named Paul Sunday on a late night, both luck and trouble come his way and influence his actions, as he strives to get more oil from the ground, but also tries to keep his dignity and his son close to him.

I was impressed and excited by several aspects of this amazing movie. First of all, the performances. By now, you should know I am a sucker for character development, interesting or just plain good performances and There Will Be Blood had it, and then some. Two stand out for me and these are Daniel Day Lewis and Paul Dano. The lead man was perfect from the first shot to the very last, showing, one by one, the multiple layers of this fascinating man: his smart side, the caring side (whenever he was around children), the fighter in him or the careless, old, drunken ghost of his successful career; he won an Oscar for this part and it is deserved, indeed. As for Paul Dano, I might be biased, but I think he was absolutely amazing, being quite a revelation as the young pastor with a creepy, but very powerful presence- not only did he stand up and match Lewis' performance, but he dared to act his part in ways not most people do. There are some scenes that prove that: the first church scene, when he performs an "exorcism", the fight between the two on the field, the baptize part (DDL saying "I am a sinner" plus the first words after, supposedly, the devil left him: "There's a pipeline"), the table discussion between Eli and his father, and the most important one, the final scene in the bowling alley room- that just entered my all time favorite scenes list and I will definitely do a separate post just for it.

That leads us to the script; based on a novel by Upton Sinclair, it provides just enough dialogue, drama, action, character and story development, to keep things going and make it more interesting as things progress- solid job by Mister Anderson here, as well.

Another beautiful aspect is, of course, the cinematography. That, combined with probably one of the best musical scores I have ever heard, takes the movie to the next level. The haunting score makes up for a certain lack of dialogue, especially at the beginning or in key scenes and visually, everything is just perfect. (one scene that I remember is the gas explosion) I love Paul Thomas Anderson's style- Boogie Nights is still stuck in my head and I cannot wait to see Magnolia (yes, kill me now, I haven't seen that, either, but I will, promise).

All in all, There Will Be Blood is a fantastic movie that cannot be missed- I highly recommend it. If I will ever make a top 50 or top 100, it would be surely be there.
Posted by Diana at 10:28 AM