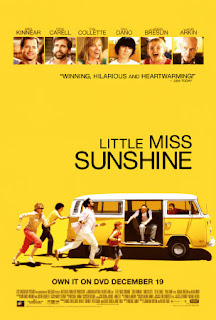 "A real loser is somebody that is so afraid of not winning, they don't even try"

I am so happy I eventually got to see Little Miss Sunshine yesterday; it was one of the sweetest movies I have ever seen, full of hope and life and power, all whilst being entertaining, but also providing a strong emotional connection and relatable characters. Directed by Jonathan Dayton and Valerie Faris and written by Michael Arndt, it follows the Hoover family into their journey to the Little Miss Sunshine pageant contest in California, where Olive, the youngest, desperately wants to compete.

I loved the fact that they started it by presenting every character with one short scene that perfectly captures the essence of each one; the song, "The winner is" by Devotchka, is amazing and quietly stalks my memories every time I think about the film.

Moving on to the actual story, it is a very interesting one, as it mixes drama, regrets, sarcasm and hate, with love, support, power and sensibility. You have delicate themes like suicide, drugs, divorce, but they are balanced with different sweet moments, like the innocence and determination of Olive, the pep talk Edwin gave to his son, Richard, after he lost his job, or the moment where Dwayne tells Olive to hug his mom. There are some laughing out loud scenes (pushing the car, getting the body out of the window, the final dance), but also some dramatic ones that were perfectly acted; two come in mind here: the table discussion about Frank's attempt to suicide and Dwayne freaking out after he found out he is colorblind (the way he couldn't contain himself inside the car, that build up to the moment in which you knew he was going to scream, and the actual moment, was just brilliant). 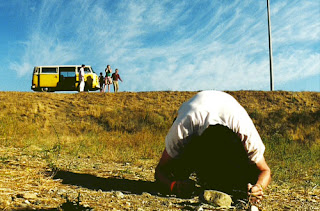 My favorite scene has to be the dance at the end, where all the family joins the little girl on stage, in an attempt to protect and encourage her- it has to be one of the most embarrassing, yet hilarious and fun scenes I have watched in a long time. In the end, although there is tension between them, they still love and support each other, no matter what. The script was just fantastic and I am so happy it got the Oscar, it is deserved.

The true magic of this story lies in the characters; they are defined, relatable, interesting; they are people with whom you can create an emotional connection, and most important, they seem real, although they have their little quirky features- you still get attached to them, and that is the best thing a script, actually a film, can hope for. What an array of individuals: the always-complaining grandfather (wonderfully played by Alan Arkin, but Oscar-worthy?hmm...maybe, maybe not), the Nietzche-silenced teenage boy (Paul Dano, with probably the best performance of the film for me, at least, just for that freaking out scene), the success-driven father who hates losers (Greg Kinnear), a mother trying to keep her family together (Toni Collette) and her suicidal brother (Steve Carrel, in his best role yet), and of course, Little Miss Sunshine herself, Olive (Abigail Breslin), who steals the spotlight with her innocence, sweetness and perverence. They are all wonderful and I love their interaction with eachother- the casting was perfect. 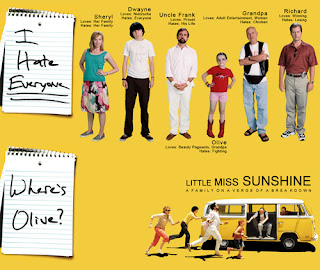 As you can see, I can't stop gushing over it, and I might have run out of compliments to give- this movie is that good, and I really hope you saw it or you will see it soon! Amongst a sea of thriller, horror and action movies or tragic dramas, this refreshing comedy/drama stands out and commands attention. I wish more films similar to this one would be made each year!
Posted by Diana at 9:21 AM