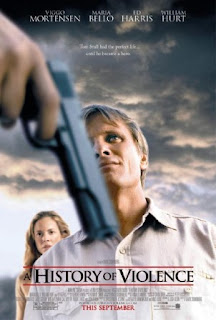 David Cronenberg's 2005 movie is interesting. It has its strong points, but some weak ones, as well, but overall, it is good film and projects a cool attitude and very strong characters.

It follows the story of Tom Stall, a small town guy who's peaceful life is disrupted by an act of violence he is forced to do, in order to save the people from his diner, when two armed men try to rob it. After this event, he becomes the hero of the town and receives unwanted attention, one that eventually leads Carl Fogarty (Ed Harris) to him, insisting that Joey Cusack, the man Carl thinks he is, comes back with him to Philadelphia.

The beginning was a little weak and, at times, boring, as it took its time to set up the story and the characters, going from scene A to scene B to scene C almost automatically. It also gave it a sense of predictability- I knew something bad will happen to the family or to Tom, and I had a feeling it will go down in the diner. I did like the progress of the story after the act of violence and one of my favorite scenes has to be the shooting in the yard. Viggo Mortensen comes in and out of character, switching from Tom to Joey with such ease and roughness, that I am left shocked and a little bit creeped out by the character and what he is capable of- just the way his expression and his eyes change from second to second, channeling Joey just enough to save himself and the family (the way he looked at Jack, his son, after he shot the man, was so intense and scary).

That being said, one of the best things about "A history of violence" are the characters- these are strong, complex, real, tough individuals that give the story and the situation more substance and a much more accute sense of reality. Viggo Mortensen as Tom/Joey gives one his best performances to date and Maria Bello shines as his innocent wife, who tries to protect her family and her hisband. Ed Harris is appropriate as the mob guy who tries to scare Tom, and William Hurt (Joey Cusack's brother) is just as tough as Harris, but with more background relevance and a scarier attitude; I also thought Ashton Holmes, as the son, was good and I can see potential there.

Coming back to the beginning, my weak points refer to the lack of music and the slow pace of action in some places, although it seemed extremely well-thought and with many layers to the story and the people involved.

Overall, I thought "A history of violence" was a good movie, with chilling performances and good action! I would recommend it! Next in line: Eastern Promises, with the same David Cronenberg and Viggo Mortensen!
Posted by Diana at 11:16 AM