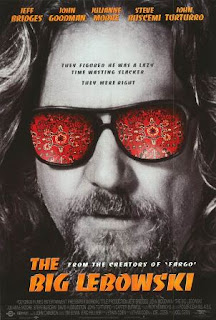 It's time for a new mini-marathon: the Coen brothers! First in line: The Big Lebowski!

Written by the two famous brothers, and directed by Joel Coen, the movie tells the story of Jeff Lebowski, a careless, lazy guy from LA (who likes to be called Dude), who gets mixed up in a shady business, as the other Jeff Lebowski, his older millionaire alter-ego, asks him to help get his much younger wife back after she is kidnapped. The plan derails and insanity occurs, as everything goes bad, and more people than necessary intervene.

I liked the movie. All the main characters (Dude, Walter, Donny, Maude) are well written and the supporting cast is very entertaining (John Turturro and the Nihilists, with Flea as a member, were particularly funny). I admired the fact that, although the Dudeness seemed like a stupid, lazy, out of this world loser, he was actually the only one who thought straight during those crazy moments and knew something was wrong most of the time; he was smart, smarter than Walter or Donny. Some call this Jeff Bridge's role of a lifetime, one that he will be remembered by his whole career, and I must agree. There is just something about his carefree, chilled, honest performance that makes the film ten times better. John Goodman, as the extreme pacifist, bowler and Lebowski's best friend, was particularly good, giving one of his best performances. I was annoyed most of the time by his character and his stupidity and stubbornness, but he complimented just fine with Jeff Bridges and Steve Buscemi's characters. (p.s. Does Steve Buscemi die in all of his movies? I just saw another Coen brothers film with him, and I know at least 2 or 3 others movies where he has the same fate). Other peculiar individual was Maude, played by Julianne Moore- strange character, weird accent, but she made it work; she always does, Julianne is fabulous in mostly everything. Special mention has to go to Phillip Seymour Hoffman, as the assistant of the millionaire, who always shines on screen, for some reason, at least for me, anyway.

The story flows smoothly and offers great laughs and an interesting situation, although I must admit some scenes were a bit off key (Dude's dreams of flying or dancing with Maude). The progressive involvement of third party people, like Maude or Treehorn, was a bit too much and it complicated the story, but it brought some great scenes; the only problem was that, in the end, the mix up was not actually fully explained or resolved, but I guess the Dude doesn't really care enough to want to know, right?  I thought the parking lot segment with the Nihilists was very funny, until that tragic moment, of course, and my favorite scenes are the ones at the bowling area or the one with the ashes.

Overall it was a very good movie and I understand the hype over it. Supported by a great cast and hilarious lines, Big Lebowski is a classic cult movie that should not be missed!

Favorite quotes
"You see what happens, Larry?"
"That rug really tied the room together"
" I still jerk off manually"
"The Dude abides"