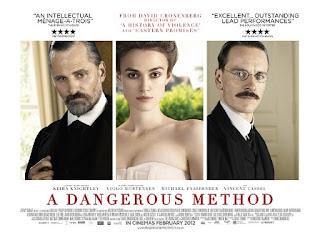 My David Cronenberg mini marathon continued with "A dangerous method" and I was pleasantly surprised, for I saw some interesting differences between his earlier movies and this one.

First of all, the beginning was much more intense and its pace helped get into the story very quickly and start understanding the characters and the situation right away. But, I still knew it was a Cronenberg movie when I realised 16 minutes have passed, but it felt like an hour- how does he do that?

Second of all, the script was better and more diverse, featuring some very introspective and thought-provoking subjects, as expected, since the movie is about the evolution of psychoanalysis. I loved the conversations between Freud and Jung and the experiments, and it was nice to see the interaction between the two doctors, especially when they realised they have opposite opinions, which of course, led to friction and interuption of their friendship- Jung wanted to move forward and research daring topics, whilst Freud never dared to question the wonders of the world around him.

One of the highlights of this film, for me anyway, was Vincent Cassel- his character, Otto Gross, was, by far, one of the most complex and interesting, and his charming presence made the story even more fascinating and appealing. Otto had a great take on monogamy, as he considered it to be a stressful concept and his motto was "Never repress anything" (case in point, his suicidal patient); he also comes up with the brilliant explanation of why Freud is obsessed with sexuality ("He is not getting any"). But, some great things never last long, so he dissapperead rather quickly.

Viggo Mortensen, as Freud, is good, and surprisingly unrecognisable; I wasn't very keen on his performance, mainly because his character doesn't evolve, and his strict mind holds him back. I thought Michael Fassbender was great, but I never stoped to analyse him or think about what he is doing- it felt like he was a driver for the story and for the other individuals, and maybe that is a very good thing. As for Keira Knightley, I still don't know what to think of it- was it exceptionally good or bad? I can't really tell, but overall, she delivered and it fitted the situation; special mention goes to Jung's wife, wonderfully played by Sarah Gadon.

"A dangerous method" is a good movie and one that raises many interesting questions, and for people interested in psycology and psychoanalysis, it will be a treat, but I think most will think of it as being quite boring. I don't recommend it to everyone, but if you have the patience and the willingness to see a movie about these topics, go for it!