On The Road- the trailer 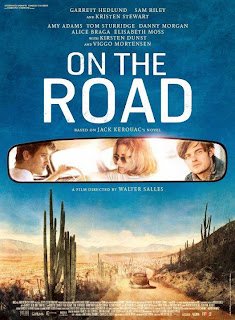 "The only people that interest me are the mad ones"

If you follow my tweets, you know I love On The Road; you know it is one of my most anticipated movies of 2012 and that I have been following the development of it for more than 2 years.

It all started after I read the book, by Jack Kerouac, and saw immediately after, that it was going to be adapted for the big screen- I had some doubts, as all readers have, but the cast sounded interesting, so I decided not to have any preconceived judgment (and it was hard in Kristen Stewart's case) and just see what happens.

The road to getting this movie on the big screen is very long and extremely interesting. The short version: Jack Kerouac wanted it to be a movie, and even wrote a letter to Marlon Brando, asking him to be Dean Moriarty. Between that time and the beginning of the 2000s it was passed on by many people, although Francis Ford Coppola held the rights ever since 1968.  A lot of big names were considered for the main parts: Brad Pitt, Leonardo DiCaprio, Johnny Depp, Sean Pean and so no. But the people who got the three main roles were basically nobodies in the middle of the 2000s, when they were cast: Sam Riley, Garrett  Hedlund and Kristen Stewart (yes, she was attached to this movie even before Twilight, or very close to the start of the first movie). That's actually one of the problems that On The Road will face: people don't believe in them; most formed an opinion after seeing one movie or franchise and immediately put them in the bad actor category, something that I personally hate and disencourage others to do.

You should all give them a chance to prove to you they are worthy enough of taking on these iconic characters. Why? Because, first of all, they worked their butts off to prepare for the shooting; it wasn't just reading the script and rehearsing three days before, it was much more than that. Garrett Hedlund promised Walter Salles he would not take any other project until the movie was done, and he kept it for at least 2 or 3 years (sorry, but I don't know for sure), until Salles said he should do Tron or other movies, as the producers weren't sure about the state of the production and when it could start. He read the books, he met with Neal Cassidy's family (the actual person Dean Moriarty was based on) and, together with the rest of the main cast, including Sam Riley, Kristen Stewart and Tom Sturridge, did a Beatnik Boot camp dedicated to that era and the book. You have to understand that most of them were very committed to the project and put a lot of passion in it. [I am sorry if I got any details wrong, but it's 2 am here and I really wanted to write this after the trailer came out; if someone is interested in the topic, I will attach some helpful links about the book, the adaptation and the development process]

The reason I like the book and, consequently, the movie, so much, is because of the story, of the memorable characters, of the vibe and the life and energy it transmits. It's like nothing I have ever read and it is worth picking it up from your local bookstore before seeing the movie.

Now, on to the trailer. First of all, here it is:


My thoughts on it:
- the cinematography is a standout: I think it looks beautiful and I love the colors and the way they shot most of the scenes- visually, it's very appealing!
- Sam Riley's accent is good; not the most American one you have ever heard, but definitely memorable and alluring!
- Garrett Hedlund has the difficult job here- the part of Dean Moriarty is make it or break it! If he pulls it off, it can definitely be an award contender, and from what I have seen it, he might be in the running next year. I might be biased here, he is one of my favorite actors.
- I know 99% of people will roll their eyes when they will see Kristen Stewart, and I know I had these doubts, as well, but it looks good so far; still, the trailer didn't show too much of her character!
- I like the chemistry between Kristen Stewart and Garrett Hedlund, and the dance scene looks pretty hot! P.S. Garrett Hedlund is actually dating Kirsten Dunst, his other wife in this movie!
- Viggo Mortensen looks like another standout in the brief moments we say him, but then again, he is amazing in every film he is in!
- the supporting cast is dynamite: Amy Adams, Steve Buscemi, Terence Howard, Viggo Mortensen, Kirsten Stewart, Alice Braga and so on!
- just some quick facts about the movie: Jose Rivera (Motorcycle Diaries) penned the script and Gustavo Santaolalla (Brokeback Mountain) composed the score;
- it will, most probably, premiere in Cannes, as its French opening date is 23 or 24 of May!
- what you didn't see in the trailer, but will certainly be in the movie: SEX, and a lot of it! if you read the book, you know what I mean and from what I've heard, it contains a lot of explicit scenes, but I am hoping it won't be slapped with a N17!

Now, it's your turn! Please let me know in the comments what you think! Is it good or bad? What stands out? What strong and weak points does it have? Will you be seeing it in the cinemas when it comes out?
Posted by Diana at 2:19 AM