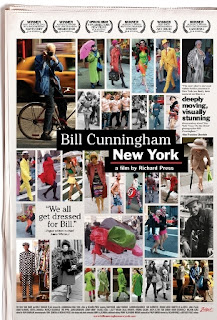 The first few shots of the Bill Cunningham documentary tend to push you away, to make you think "why is this creepy old guy stalking girls on the streets of New York?".

This creepy old guy, this sweet, energetic, full of passion guy is Bill Cunningham, a world known photographer who has 2 columns in the New York Times newspaper. His speciality? Street Style- what he basically does is go out every day (or night, in some cases) and shoot random people he finds interesting or fascinating. It can either be because of the shoes, or the funky clothes, or just because the shot might be good (he loves taking photos during a storm or bad weather).  Yes, he is quircky, but his passion is admirable; he is happy with a camera in hand.

The documentary doesn't show too much of his private life, with the exception of his apartment and some close friends- maybe because his story is not interesting, maybe because he doesn't want to share. Bill Cunningham lives in a very small apartment in Carnegie Hall (a building who is currently occupied by offices); he has one bed, a few clothes on hangers spread all around, a lot of fashion books and cabinets, cabinets full of negatives- oh, and the bathroom is on the hall.

At the age of 80, he has something that most people in fashion desire from the first moment they start- respect, admiration and a lot of event invitations. Icons like Anna Wintour talk about him in very high terms: "I said many times that we all get dressed for Bill", and former business partners (like Details founding editor and art director) admire his devotion and passion for passion.

Bill Cunninhgam innovated, he took risks and, not even knowing, he observed and, more importantly, created trends- in fashion and in photography. His street style column forged the way for the thousands of fashion bloggers all around the world today. He is always guided by amazing work ethics and never gives in- for example, he doesn't drink or eat at the events he is invited to.

Along the way, we get to witness some beautiful, but also funny scenes: Editta, his longtime neighbour, trying on hats and talking about her work, the story of the blue jacket he always wears, the constant bantering between Bill and the current Art editor of New York Times, and so on.

He is a sweet man, but you can't help feeling sorry for him, especially at the end, when he responds to a question about his private life by saying that he hasn't had romantic relationships in his life, he just always had clothes on his mind- you expect it, but it is sad; don't people need love to survive? The last question from the reporter was, surprisingly, the one that proved to be the most difficult one to answer: are you faithful? do you believe in God? to which he gives a truly genuine, honest, moving reaction- it got to me. I won't say, that's the beauty of watching the movie for yourself.

Which you should: watch Bill Cunningham New York, especially if you are interested in the fashion industry, or just like interesting characters, cause he sure is one! A good documentary overall!
Posted by Diana at 9:16 AM