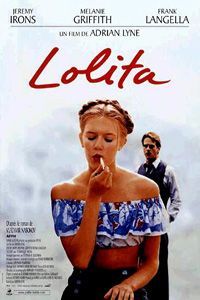 The 1997 version of Lolita, made by Adrian Lyne, is apparently more accurate to the book written by Vladimir Nabokov, but not as good as Kubrick's version. It tells the story of a lonely teacher with a secret desire for young women who marries his landlady in order to have her devilish little daughter. After the woman dies in a car accident, Humbert takes the little girl away from camp, to a little journey across country and then to school, starting a forbidden affair that drives him mad by the end.

Jeremy Irons plays professor Humbert with passion, making his otherwise despicable character, a man with a conscious and needs that go beyond his power. Although you disagree of what he is doing to the little girl, you cannot deny the fact the man is sick and that he is not doing it with an ulterior motive or because a twisted fantasy. The tragic death of his first love at 14 stopped time for him from a sexual point of view and so, he is only attracted to 14 year-olds. You might say I am defending him or trying to justify his actions, but I don't think I am- I'm just telling you what I observed and understood from the film. Yes, what he did was unforgettable, but he did for love....and he never wanted to harm her. His naivety and blind passion for the girl made him go to extreme ways in order to protect her and, probably, his most surprising act was the vengeance he prepared for Clare Quilty, the man who was responsible for the rupture between him and Dolores. I could go on and on about his character and what drove him, but I think I might be doing into a controversial territory, so let's go back to Lo, shall we?

Oh, Lolita, you little temptress! The young woman knew exactly what she was doing and although she played the act very well, you could see how easily she understood Humbert's attraction to her and how she decided to act in her favor. Despite the fact that she was young and you could say she wasn't mature enough to realize the consequences of her actions, I think she knew and accepted the situation in order to survive. Here is what I don't get: why did she put up with it? Why did she last that long and then go with Quilty, who was even worse than Humbert? And the most important question: how did she really feel about her father- well, stepfather? At then end, when he visits Lo in her new house, they talk about the past, but I still can't tell how she really felt about it- she seemed to have left it all behind her, but...I don't know, I still don't get it! Dominique Swain was sensational as Lolita- she was very beautiful and she perfectly portrayed the part of a seductive, sensual little girl, with apparently no knowledge of her power over Humbert.

I could go around the bush forever with this story and the two main characters- their relationship is complicated, but I think in order to understand it, you first need to analyze and figure out each one individually- their human nature, their motivation and their needs. It is too much for me to talk about it here and I am sure that if I will read the book, I will probably understand it better, but this is a movie, so maybe I should go back to it.

From a film-making point of view, I could say the film was good. The cinematography was beautiful and I liked the random close-ups and weird camera movement that was used to express Humbert's panic or despair, plus the score was remarkably pleasant and appropriate to the story, but overall I didn't find anything special. After it ended, I quickly resumed my activities and forgot about it in 10 minutes. That's not a great sign of a particularly interesting movie, isn't it?
Posted by Diana at 11:10 AM