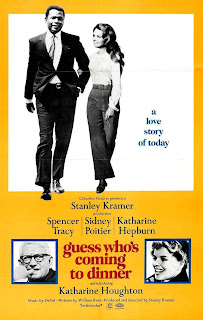 Written by William Rose and directed by Stanley Kramer, this 1967 classic tells the story of a couple who have to break the news of their future wedding to their parents, whilst battling race issues and prejudices. John Prentice, a successful over 30 black man, falls in love in Hawaii, at a conference, with Joey Drayton, a 23 year old girl. Their short adventure immediately leads to an engagement, and so they decide to go to San Francisco to tell her parents the news. Joey is naive, as she doesn't see the problem in the difference between her and John- she was raised not to believe or support racism, and she expects everyone around her to agree. Doctor Prentice is much more mature and rational and perfectly understands the problems that might occur when two people from different races form a couple, especially in those times.

The film is a great example of character development and good script. One of the key moments of the story is the parents' reaction. The mother, wonderfully played by Katharine Hepburn (who also won an Oscar for her role), finds out first. She is shocked, but restrains herself, saying almost nothing, but everything shows on her face. All actresses from the past have such an expressive face, you can always understand what they are feeling, and miss Hepburn is no exception. Although her initial reaction is not so positive, she quickly changes her mind when she sees how in love her daughter is; plus, it doesn't hurt that her fiancee is a smart, impressive man. The father doesn't take as well; shocked, he goes up and down in different stages of accepting the fate of his girl, from surprise, to concern, to admiration for the man, all leading to a firm denial of the possibility that things will go well for the couple. John's parents have similar opinions, although they must face the truth and decide if they agree or not much faster. The women easily come to a positive conclusion and try to convince their better halves that the union should go on. In the end, misses Prentice convinces mister Drayton to change his mind, all culminating in a great speech about love, support and prejudice. I liked it, but it seemed to be too much of a nice ending to the film.

I also liked the fact that the feature touched upon numerous themes and usual characteristic of people. For example, you could see that women approved the relationship in a short period of time, while the fathers were against it from the beginning and took a long time to rethink- it's just to show you that men are more stubborn and women are willing to compromise and see beyond the obvious. You could also easily observe the racism situation, especially in the way people looked at them, instantly judging and frowning at the unlikely pair. It was very uncommon to see mixed-race couples back then, so of course it raised a lot of eyebrows, plus people weren't  as open-minded as today, so things were even worse than you would expect. 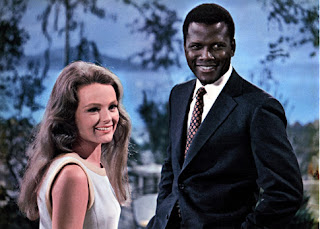 From a filmmaking point of view, the best aspect of the movie was definitely the script- the dialogue was good, the storyline was interesting, it raised a lot of questions and it was funny at some points; just the right mix of things in order to make the film very enjoyable. The direction and cinematography matched the vibe of it very well and the set and costumes were amazing.

The casting was very good, including world class actors like Katharine Hepburn, Sidney Poitier, Spencer Tracy and Cecil Kellaway. The latter, as Monsenior Ryan, was particularly entertaining and, together with Tillie (Isabel Sanford), formed a great supporting pair.

Overal, `Guess who's coming to dinner` was a fantastic movie, with a good script, that is worth spending 1h and 30-40 minutes in front of the TV or computer!
Posted by Diana at 6:47 PM