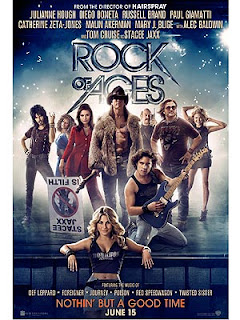 Yesterday I decided to take advantage of the great Orange Wednesdays offer (although I don't have Orange, so I borrowed a code) and go see a movie with my friend; we didn't have a great selection to choose from, so we went in to see Rock of Ages- a harmless musical that could entertain us!

The Adam Shankman production is exactly what you would expect it to be: loud, colorful, with crazy choreography and a feelgood atmosphere that never leaves the screen. It works for a musical, and although you will cringe in several points of the movie, you will still enjoy it, as it is fun to watch!

It follows the story of Cherri, an Oklahoma girl with big dreams who moves to LA to start a music career. She begins working at the Bourbon, the best club in town, and meets Drew, also an aspiring artist. They fall in love, but live a short romance and go their separate ways after Drew secures a recording deal. The story has a happy ending, as expected, in a cliche way, of course, but features several scenes that are memorable: the Stacee Jaxx (Tom Cruise)- Constance, the reporter (Malin Akerman) duet, the extremely funny Alec Baldwin-Russell Brand scenes (including a hilarious Can't fight this feeling sing a long) and "We Built this city on Rock'n Roll" climax.

From the musical point of view, it was amazing, because it featured some of the best rock songs ever. Both me and my friend enjoyed them and found ourselves quietly singing the lyrics. I do remember my friend saying, 20 minutes into the movie, "are they going to sing the whole time?"- she was right to ask, as most of screen time was used for that, and I can't complain about the music, but I can about the acting and the staging, which was incredibly over the top. I understand it was based on a musical, but let's face it, this was a movie, not a stage thing. I think Adam Shankman spent too much time on Broadway.

The cast was fantastic, and although it was a tad too much to watch, especially with the dialogue lines and the choreography, they still delivered. The standout was definitely Catherine Zeta Jones- that woman is a force of nature and she rocked every scene, I just love her. Another great performance was given by Tom Cruise, who truly immersed himself into the character, and made it believable....I guess. Malin Akerman had great chemistry with him and their scenes were amazing. As for the two leads, Julianne Hough and Diego Boneta, what can I say? They were fine, they were sweet and dreamy and worked well together, with a lot of passion and enthusiasm, but I wasn't blown away by them.

Rock of Ages is crazy, over the top and full of cliches, and you will probably roll your eyes or cringe numerous times, but if you're looking for a fun movie night or something entertaining, this will do the trick. The girls might like it more than the boys!

Did you see it? what was your reaction?