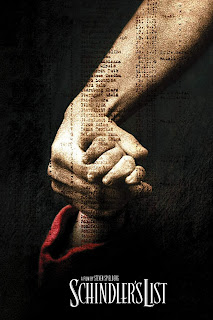 This 1993 multiple awards winning classic is rightfully considered a masterpiece. If the mention of 7 Oscars, including Best Picture, Screenplay and Cinematography, don't give you a clue that you are dealing with a fantastic movie, then maybe the cast or the story will. Set during the second world war, it speaks about the unfair and truly awful destiny the Jews had to face during Hitler's tyrannic era.

It's a story about Oskar Schindler(Liam Neeson), a wealthy, smart man who decides to take advantage of the troubled times that the world was facing and make money out of it. He sets up a factory in Krakow, together with a quiet, smart Jew accountant(Ben Kingsley) by accepting and therefore helping the people living in the ghetto. Stern, the faithful right man, started the initiative, giving a hand to the ones in need, but after a while, Oskar sees his efforts and decides to continue his work, by rescuing as many men and women as he can, all ending into a touching, yet unbelievable situation where he has to buy more than 1100 people from Amon, the ruthless German commandant, in order to save them from Auschwitz and the terrible fate it waited for them. For that, he was always remembered as a hero and saviour, and the next generations of the people who he managed to get out the concentration camps are now more than the survivors of the remaining Jews in Poland after 44.

The story, therefore the screenplay, written by Steven Zaillian, after a Thomas Keneally book, was memorable, intense at points, with fantastic scenes from time to time, but it did felt a little too much. I think it's probably the only thing I would have to comment about this film- 3 hours is a bit too much, although I perfectly understand why they did it. Other than that, Steven Zaillian managed to tell a heartbreaking, tragic story in a script worthy  of its accolades, although from what I've later heard, it wasn't entirely accurate. I set out with a clear opinion and feel of mister Schindler, but  a discussion with a friend changed my mind. He said he read the book and that in it, Oskar didn't actually care about the people- his only interest was having a good, cheap workforce. This little detail was clearly modified in the script, and it disturbed me and somehow downgraded, even if just for a tiny bit,the film. They didn't tell the story like it happened, but then again, it is a film and I guess Spielberg and Zaillian have the right to somehow make the situation a little sweater and more cinematic, right?

Continuing the praises for this feature, I must mention Steven Spielberg who did a stunning job. I loved  the direction and I felt it perfectly suited the atmosphere and the tone of it, not to mention that it helped portray the characters in the best way possible, even if they happened to be a ruthless killer or a silent housekeeper.  The sudden killing spree in the ghetto on March 13 was just amazing- the whole production and the way it was shot was  sensational, memorable and chilling. The red coat detail was well placed and added more drama to the already tragic situation.

The cinematography was definitely a high point of the film, as Janusz Kaminski used Black and White in such a beautiful, artistic and visually attracting way. The sets and costumes perfectly coordinated with the image and tone of the story, and the score, mostly orchestral, but with melancholic American hits sprinkled between,highlighted the essentials and made everything feel real.

As expected, the perfect cast delivered in a superb way, adding even more layers to already complex characters, and somehow fitting it into that era and its customs and way of being. I know everyone remembers and deeply appreciates Ralph Fiennes for his unbelievable rendition of Amon Goeth, and I do that,too, I cannot not notice the character or its delivery, but my personal favorites were Sir Ben Kingsley and Liam Neeson. They worked together seemingly effortless and maybe I liked them more because their parts were more approachable and real. While Neeson does his best to showcase the true side of Schindler, with charisma and intelligence, Kingsley, with his natural talent and poise, stands out for me, although his part is much more quiet and reserved.

Maybe I am overreacting about Schindler's list, but honestly, for me at least, it's one of those movies that is almost flawless, it's the type of film that perfectly blends the story with the visual and audio, creating a different, almost real word inside a frame, a film that moves you, all while featuring wonderful performances that cannot be missed.

Schindler's List is a must see feature for everyone.
Posted by Diana at 6:38 PM