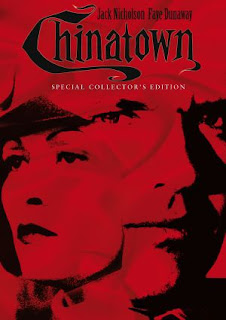 Chinatown is a 1974 classic directed by Roman Polanski and written by Robert Towne, about a private investigator (Jack Nicholson) who stumbles upon a very important fraud case after a seemingly simple job.

A woman hires Gittes to see if her husband, Hollis Mulwray, who happens to have a key position in the water department of Los Angeles, is cheating. Turns out he was, but the lady who ordered the job was not actually the wife. Here's where the lovely Faye Dunaway comes in, in a great chinaman joke scene. The case complicates after the husband turns up dead, and so a whole conspiracy unfolds regarding the water supply to the city, all whilst shocking dark secrets of the woman's family threaten  the life of Evelyn Mulwray and the people around her.

Chinatown is a very good film that stands out mostly because of his intricate, always intriguing screenplay (which won a lot of awards back in the day). The story is complex, the characters are cool, reserved and with a touch of mistery, and the visuals are sometimes breathtaking- it drives you in and demands your attention. On the one hand, I liked the script and there were some scenes that stood out for me- for example, the after sex bed scene- their conversation, the way they look at each other, their attitude, everything was so sultry and appealing. On the other hand, I didn't find it to be particularly fantastic, although I know it has been praised by many. What I did like and what was the high point in my perspective, at least,was Roman Polanski's direction style. It is simple, classic, but quite sleek and visually beautiful, highlighting the cinematography and the production design in a great way.

The cast was strong and of course both leads stole the show; Faye Dunaway, as Evelyn Mulwray, was stunning- the true incarnation of classic beauty, effortless charm, with  the same poise and style as icons like Audrey Hepburn or Katharine Hepburn. She was probably one of the last starlets of Hollywood- from the late 70s, early 80s everything changed. Her chemistry with Jack Nicholson was palpable, intense and believable. He was also sensational in this role- he is, after all, one of the greatest actors ever. Somehow, he reminds me of Leonardo DiCaprio, or maybe it's better to say DiCaprio reminds me of Nicholson. Either way, there is something special about Nicholson and I noticed that every time he comes on screen- it can be the attitude, or the charm, but it's definitely the talent that is always pushing him on top.

Chinatown is an intriguing story that constantly reveals new dark secrets about the LA world, featuring two great performances and a complex storyline. I recommend it, you should definitely find time to see it!
Posted by Diana at 3:37 PM