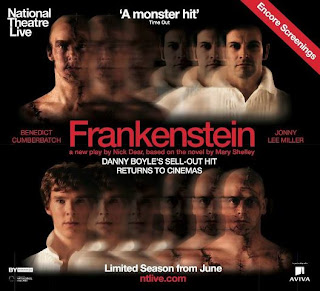 Frankestein is a 2011 National Theatre UK play directed by Danny Boyle, which not only was presented as a stage project, but also was broadcasted live in cinemas all around the country. It is a superb production, starring Benedict Cumberbatch and Jonny Miller as both The Creature and Frankenstein- they switched roles every night, and so the two men got to play both roles in alternative nights. As expected, the show was not significantly different, but the two fantastic actors portrayed the parts in totally different ways. For example, from what I've heard, Miller as the Creature is much more dynamic, but also human; Cumberbatch's movements, especially in the beginning, are slower and he chose to act the part in much more raw, evil way, compared to his partner.

As you might now, it tells the story of a young man named Frankenstein who created a man, but was so shocked to see his project come to life, that he left him, running away. We experience the show from the creature perspective- we see him breathe for the first time, and then starting to learning to move, speak, eat and so on. After being beaten and considered to be a monster, he ends up at the house of a kind, old, blind man, who, unaware of the Creature appearance, takes pity in him and proceeds in teaching him how to read, speak and yearn for more knowledge and love. It is now when one of my favorite scenes occurs, as they talk about life, its meaning, why people act the way they do and others. I'm sure that if you've read the book, you will know what I am talking about. Tragedy comes when the old man's son doesn't approve of the peculiar human being, and so, it moves on and takes upon him to find Frankenstein and convince him to make him a female creature. Frankenstein agrees, but suddenly changes his mind moments before creating her, in one of the beautiful, touching scenes I have seen, as the Creature explains to him what he thinks love is and how it feels. The script, the lines, the dialogue, their interaction, everything was perfect. I think that was the point where I decided that I definitely need to read the book, as well. Infuriated, the Creature goes after the professor and ruins his wedding day, starting a long journey to the north with the scientist behind him, as Frankenstein vows to kill him.


I had the pleasure to see a screening of the production last week with Jonny Lee Miller as the Creature- he completely surprised me and I was floored by his performance. To start with, I was impressed by his commitment to the part- playing such an iconic, but also extremely peculiar and unique part, is a hard task, especially in the first half of the play, when he basically has to show us how a man learns in 20 minutes what we learn in 20 years. It's strange, yet appealing, and he convinced us all that he was the Creature. There were so many little details, so many gestures, hand movements and so on, that helped create the character and make us understand him. Miller is a force of nature and deserves all the credit, alongside his co-star, of course.

Benedict Cumberbatch played the part of the professor and had a more supporting role, although the second part featured a lot of key scenes between the two men. The talented English man, as expected, was fantastic in the part and had great chemistry with Miller, and I have a feeling that him as the Creature would have been just as interesting to watch, although, like I said, Jonny Lee was superb.

As for the actual production, I have to say that Danny Boyle did wonders. Everything was visually beautiful, especially the lighting, the score was haunting and appropriate to the play and you could see the director had a cinematographic vision.

The play was very well received in the UK, earning many accolades, including Best Actor at the Laurence Olivier awards (the Tony's of UK theatre), split between Miller and Cumberbatch. I know it will be shown in cinemas this autumn in Europe, but I really hope the people from the US or Australia or India will get to see it, too, somehow. It is a fascinating play/movie and I highly recommend it!
Posted by Diana at 2:08 PM