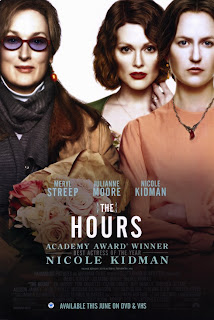 Directed by Stephen Daldry and based on a novel by Michael Cunningham, with a screenplay penned by David Hare, The Hours is a remarkable movie starring three women (Nicole Kidman, Julianne Moore and Meryl Streep) connected by a book, Mrs Dalloway, who have to overcome the trails and tribulations of a single day that may change their lives forever.

We start by observing Nicole Kidman's storyline, who stars as Virginia Woolf, an unstable woman in the care of numerous doctors and under the supervision of her husband, Leonard, played by Stephen Dillane. She is mentally disturbed, while having hallucinations and suicide thoughts. That morning, she begins to write her book, Mrs Dalloway, and spends the day figuring it out the plot line and trying to overcome overwhelming emotions of depression and boredom, feeling she was trapped in that small town where everyone considered it to be better for her than London. Nicole Kidman was absolutely fantastic, giving a stunning performance- the accent was on point and you can easily see the great transformation pshycally and mentally. She won an Oscar for this role and I believe it was well deserved, although I don't know her competitors in the category from that year. The husband also gave a surprisingly good performance, which was reserved, but full of love and concern, and it was nice to see Miranda Richardson as the sister.

The second story follows Laura McGrath- Brown, a seemingly happy wife and mother of one, plus one on the way, living in 1951 Los Angeles. Although she has a good life, a loving husband(John C.Reilly) and a lovely boy, she is miserable in her apparently perfect life, for reasons even she can't understand. Laura grows more nervous as the day passes and even books a room in a hotel with the thought of killing herself, but somehow she changes her mind and returns to her family. The boy notices something is wrong , he can feel it, especially when he starts screaming from the top of his lungs when she leaves him at the neighbour's house. The interesting part of the story comes at then end when we see the connection between Julianne Moore's character and Streep's. Throughout the movie, Julianne Moore shines and gives a stunning performance, quiet, but appealing and emotional, and makes you feel everything her character is feeling. I was very impressed by her in this role.

Clarissa Vaughan, the third woman, wakes up in New York, year 2001, with the thought that she will buy the flowers for the party she is throwing her very good friend, Richard, an accomplised writer. During the day we discover that the connection between the two is very powerful and has deep roots from their early teenage years. He is dying of AIDS, but she won't let him go, to say so, holding on to the hope and the strong relationship they have. Ed Harris, as the sick man, was fantasic, and gave a chilling, moving performance of a man in search of peace and love. The reveal of his connection with the previous story was a little bit shocking, but gave us more details and made us better understand the situation. His last scene with Streep was breathtaking and very emotional and I love the speech he gave. Claire Danes also has a short appearance, showing a careless, sweet and free youthful energy, and of course, Allison Janey is part of the cast- I love her and she's not disappointing, either, despite her small part. Suprisingly enough, from my point of view, Meryl was the weakest link between the three leads- she didn't do anything wrong, but I didn't feel her spirit and commitment as much as the other two, although the scene in the kitchen with Jeff Daniels, her breakdown, was quite something.

From the filmmaking point of view, The Hours is close to perfection. I loved the simple style of direction, which helped us focus more on the story and its characters. Although you do see some interesting elements regarding camera movement, like a special focus on details (eggs), or flawless cinematography, it's the screenplay and the acor's performance that shines through. Every scene is perfectly executed and draws you in; the music, together with the sets and costumes, are absolutely stunning and they capture and emote the emotions of the story. Overall, it mixes the drama with the music and the beautiful language and the rough feelings and unsaid things, creating a sad, yet bittersweet world.

Somehow, I associate The Hours with a A Single Man, by Tom Ford. The connection is made in my mind, maybe by the similarities in stories, characters or direction. A Single Man is one of my all-time favorite movies and I can say now that The Hours is also added to that category. Beautiful film that you should definitely see!

Favorite quotes
"Mrs Dalloway, always giving parties to cover the silence"
"But I still have to face the hours, don't I?"
Posted by Diana at 11:03 AM