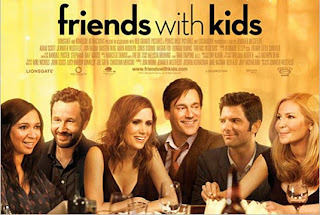 Friends with kids is a 2012 film written and directed by Jennifer Westfeldt, who just happens to be Jon Ham's better half, as well. It's about two best friends, a guy and a girl, who decide to have a child together when time runs out, their friends start having kids and they can't seem to find the right person to start a family with.

I am afraid this review might turn out to be very short because frankly, there is nothing outstanding about this film, although it is entertaining and mostly delivers in every aspect. The script is one of the strongest points, yet I must admit the end is too good to be true, but hey, it's fiction, it's a movie, so I'll just take it as it is and enjoy it.The dialogue is witty and occasionally funny, and the actors make it work very well- it does have a realistic feel to it. Considering it is set in the present day of New York, I can't really say anything about the sets, the costumes or the direction- everything felt....OK. Really, nothing bad or good stood out!

One thing I particularly liked was the casting. Yes, Kristen Wiig and Jon Hamm are one of the couples and they are surprisingly good in a non-comedic role, especially Wiig, who I was impressed by, but my favorites have to be Maya Rudolph and Chris O'Dowd. They are dynamite together and form a weird, but adorable and funny pair that light up the screen- O'Dowd, in particular, is on his way to stardom, just because of his charisma, English charm and talent, and I've loved Rudolph ever since the SNL day and I still think she is one hell of a woman. Adam Scott did a pretty good job portraying the sarcastic, often blind-to-the-obvious type of man who always goes for the easy route, whilst Jennifer Westfeldt offers a nice surprise, adding compassion, love and a touch of sweetness to the cast and the story. They form an odd couple, but I could see it happen in real life.

Overall, like I said, there was nothing very bad or very good to say about it. `Friends with kids` is a nice, normal, romantic comedy that you could probably watch anytime- put the DVD in, enjoy it for the almost 2 hours it runs, and then forget about it. I would recommend it just because it is a light movie that can be seen whenever you need something to cheer you up or take your mind off things.
Posted by Diana at 8:18 PM