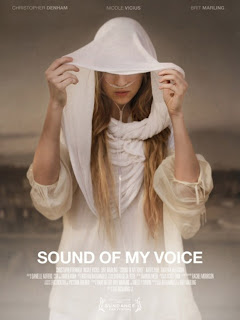 Sound of My Voice is a Brit Marling movie (written, acted and produced by her) about a cult revolved around a young woman who claims to be from the future. Peter Aitken, a late 20s guy, infiltrates into the group with his girlfriend, Lorna, in order to make a documentary about Maggie, the mysterious woman, and show to the world she is just a fraud. The situation changes when he is suddenly attracted and intrigued by Maggie, in spite of his earlier doubts.

One of the things I love most about Brit Marling is her ability to create such curious stories, with sometimes unbelievable ideas (mostly science fiction), that blend together and form a type of film that you are, without realizing, drawn into and inexplicably fascinated of, although it doesn't seem that interesting on a first glance. This story has a little bit of everything: drama, mystery, character development, philosophy, and sci fi, but what ties it together is the performances of the main actors, Marling, Denham (Peter Aitken) and Vicius (Lorna).

Christopher Denham, playing Peter, the man who is keen to show the true Maggie to the world, is quite the revelation, as he suffers the biggest transformation, all starting to change after the absolutely fantastic scene of the apple, my favorite. Nicole Vicius offers an equally great performance, as the girlfriend who takes the exact opposite path to Peter: she starts up intrigued by her, almost believing, but ends up plotting against her. But hands down, the best part was played by Brit Marling, the very talented woman who is simply mesmerizing- I don't know if it's just looks or something else completely, but she draws attention in every form and gives a credible and sometimes realistic performance. I expect great things from her in the future.

One of the reasons I wasn't overly excited about Another Earth (her previous film) was the directing, but Sound of my voice is much better, and as a whole, it works and looks very good. I loved the part where she told her story, or the first time we see them taking all the precautions to get to the safe house, and especially, the apple and confession scene, fantastically played by both Denham and Marling. As for the ending, I equally loved it and hated it- it made you realize that maybe she is not lying and is from the future, but also it made you imagine the next step for Peter- will he follow her or not? will he help her escape or not? will he believe her?

So yes, you do have to see Sound of My Voice, because of the script and because of Marling's mesmerizing performance and talent in all accounts. I recommend it and hope you'll like it, too!
Posted by Diana at 9:35 AM