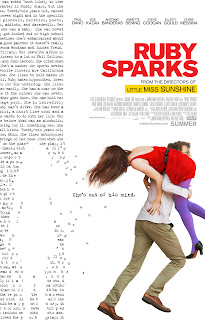 Ruby Sparks is a 2012 comedy written by Zoey Kazan about a writer to creates a perfect woman character who loves him, and somehow transforms her into reality. Directed by the talented duo Jonathan Dayton and Valerie Faris, it stars Paul Dano as Calvin, the young prodigy who creates Ruby Sparks (Zoey Kazan) on paper, the seemingly perfect woman for him. It's a sweet, unconventional, very funny and interesting love story that it's worth seeing.

One of the key strong points of the movie was definitely the script, one that perfectly blends humor with love and deeper themes like loneliness, selfishness, desire and control. Zoe Kazan, a first time writer, I think (I may be wrong), does a good job in creating a story with heart and delivering realistic lines of dialogue and characters (such as the girl who gives Calvin her number and then meets up with him at the coffee shop, or his brother), but mixing it with a little bit of fantasy and quirkiness (the parents, the idea of making Ruby come true and others).  There are many things that I loved about the film and I don't know a better way than just write them down, one by one. And so, I loved:

- the first scene and the lighting
- the more practical older brother (Chris Messina)- "women are mysterious creatures"
- the therapist- "I love it when you say stupid things"
- the scene describing Ruby
- the mother and her Spanish partner (Annette Bening and Antonio Banderas) and their quirky house
- the acting all around, especially Paul Dano
- " you're real"
- "I want to be what's making her happy, without me being the one who's making her happy"

The last part of the film was a bit surprising for me and I think that made me reconsider my whole opinion on it. Although it is a fun movie, it wasn't afraid to go dark and explore the bad side of Calvin, with his need of control and love. At some point it gets too far and that scene where he makes her do so many crazy things definitely proves that. This set me off and the ending felt the same because, well...because it was sweet and...too good to be true? Maybe it was just me, but considering the innovative and interesting way it was written, I had expected more, but then again, it is a Hollywood movie...

In the end, I think it is one of 2012's best and you should see it- a nice, funny indie that dares to go deeper and darker, in a creative and sweet way. Please do see Ruby Sparks!

Something is missing...maybe the end was unsatisfactory
Posted by Diana at 1:25 PM