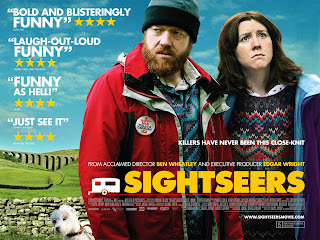 Back in September, at the FDA showcase event in London, I had the chance to watch Sightseers, a very interesting, quite distinct film, directed by Ben Wheatley (of Kill List fame), and written by the two leading actors, Alice Lowe and Steve Oram. It tells the macabre story of a couple who go on a romantic cross-country trip, only for her to discover Chris is a serial killer.

You have to see Sightseers- it's one of the best, most creative and funny movies I have seen in a while, despite its violence and gory details. The script is a definite highlight of the film- it features realistic and approachable characters in strange, highly unlikely situations, and most of all, it tells a story. What I admired most about the script was the perfect mix between darkness/violence and humor  done in a funny way, but also balancing it properly to create a good film to watch.

One of the other things I liked about Sightseers is the fact we can see a definite transformation, on both accounts, especially personality wise, although the action is also thrilling. The man tries to adapt and hide his condition, but ultimately can't hide back his true nature, while the woman starts as an innocent person, who is faced with a horrifying truth and has to decide what to do next- her future actions are quite shocking. The two actors, Alice and Steve, work perfectly together and deliver their lines in a fun to watch manner, the dialogue and setting making it unmistakably British. Side note- favorite line: "he's not a person, love, he's a Daily Mail reader".

From a filmmaking point of view, I thought it was well-made and realistically portrayed a violent nature of humankind, knowing when to shock and when to hold back, especially when it came to the actual deaths. I did find the slow motion use for the dramatic scenes a bit weird at the beginning, but I got used to it by the end.

Sightseers is one of this years' best British films, in both story and characters, and I highly recommend it- I enjoyed myself and I hope you will, too.
Posted by Diana at 10:45 AM