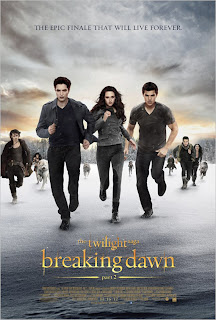 Last week, my sister took me to see Breaking Dawn I & II, as she is a big fan of the books and series (she is 7 years older than me). I didn't like the first part last year, but I said OK now just to see how things will develop and have a clear view on the whole situation. After the screenings, I can still say I don't like BD1, but 2 is a rather good ending to a very successful franchise.

Breaking Dawn 1 starts with the illustrious wedding, which was done in a very tasteful, beautiful way- I loved the dress and the very awkward speeches, but the dialogue was still incredibly cheesy. They obviously consume their honeymoon, and Bella soon realizes she is pregnant, which, with a vampire being the baby daddy, it's practically impossible. The rest of the movie consists of Bella getting worse by the day as she refuses to give up the baby that is slowly killing her. As expected, it ends with the birth of Renesmee and Bella as a new vampire.

Why I didn't enjoy it? Although I understand why they split the book in two movies, the second half of BD1 still dragged on, even though they cut a lot of scenes. On another note, as usual, I really didn't like the dialogue and its delivery by the actors- it's weird, because I loved the book and on paper it was better than what it sounded on screen. Still, the supporting characters were downright hilariously bad, especially Jackson Rathbone and Kellan Lutz, and their look is still unconvincing. High points? Wedding, honeymoon, Bella's look and the transformation into vampire.

Breaking Dawn 2 was much better, which was curious, considering it was directed by the same man and in the same time as 1- maybe the story moved a little faster than the first part. But don't think I loved it, because I still found many flaws to it- let's just say I liked it overall and it gave a nice ending to a series of books I used to love. BD2 follows the Cullen family in their happy days as the young girl grows and Bella gets used to her new state, but the clouds come in when the Volturi find out about the child and decide to kill her. The ending features a violent fight between the Cullen's friends and the Volturi clan, which has a surprising turn that I quite liked. The last scene is, of course, very romantic and a sweet wrap-up of the now famous love story.

I know most men will hate BD2, but I thought it was fine. It was slightly better than most Twilight films on all accounts and the fight scene was very cool, including its conclusion. If I could object to one thing, and that could apply to all the franchise movies, is the hair and make-up of the vampires- they never ever got it right (with the exception of Robert Pattinson, of course, and Kristen Stewart in the last one), it all looked absolutely horrible and cheesy.

Should you see Breaking Dawn 2? Well, if you watched all previous 4, than yes, you should, just to see how it all ends, no matter how painful in might be. If you skipped through Twilight films, and saw just one or two, just forget it, it's probably not for you.
Posted by Diana at 11:12 AM