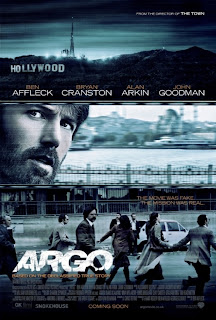 Last week, on its first day of release in Romanian cinemas, I went to see Argo, Ben Affleck's latest directorial and acting effort. Written by Chris Terrio and based on a true story, it tells the story of 1980 joint CIA-Canadian secret operation to extract six fugitive American diplomatic personnel out of revolutionary Iran. It's a very well made film that has mostly high points, although it is not as perfect as some might say.

The true story set in the 1979/1980s recalls the conflict between the US and Iran over the extradition of former Iranian leader, which led to a hostage situation and even a revolution in the Arabic country, and that's the main trigger of the script. Tony Mendez, played by Affleck, comes in as an extraction specialist to help get out 6 embassy employees who managed to get out of the building before the people marched in and took control. As much as it is a suspense and thriller story, it is also an emotional one, and the end will keep you on your toes on all accounts. The screenplay is quite good and manages to mix different themes and characters without creating confusion or being too cliche. Maybe this where the movie's success lies in, in the interesting and qualitative combination of story, character development and emotional deliverance, one that has proven hard to accomplish lately in cinema.

But things aren't perfect all the way through; one thing that I particularly didn't like was Affleck's direction. It felt, in most cases, too dynamic, too fast, and it did not have a clean and fluid shooting style- some scenes were rather hard and visually tiring to watch. I know he is mentioned in many awards predictions of Best Director, but I think there are better ones on the list that should have the prize. Other than that, the rest of the filmmaking elements were pretty good, especially the score and cinematography, but also the set design.

Casting wise, Argo was flawless. I, personally, thought Ben Affleck was a better actor than director here, although I have seen better performances from him in previous years. I also don't get why people are pushing Alan Arkin for a Supporting category; if it would be my choice, I would go for either Bryan Cranston or John Goodman, these two shined much more than him. The actors portraying the 6 embassy employees were also well chosen and I particularly loved the woman playing Cora Lijek, Clea DuVall.

Since we are already talking about awards, I can definitely see it nominated for Best Picture, Director (although I don't agree), Cast, maybe Script, and I can see it being a worthy candidate for Best Picture, most likely.

Argo is a very well made film that deserves all the attention is getting, but it is not the masterpiece some are claiming it to be. It is a film that will appeal to many and I wouldn't mind it that much for it to win Best Picture, it would be a safe and predictable choice. Definitely see it!