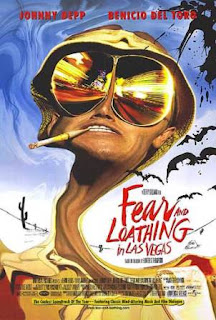 Fear and Loathing in Las Vegas is a movie under the influence of drugs- from beginning to end, the large quantity of addictive substances influence not only the characters, but also the story, the visuals, the sound and so on. It's absolutely crazy and I still don't know what to think of it- do I like it, do I hate it or is it too messed up to form an opinion?

Either way, I have to acknowledge the talent and courage(?) of Terry Gilliam and, of course, of both Johnny Depp and Benicio Del Toro- yes, they are just playing a part, but the extent to which they went through to showcase their characters is commendable.

The story is set in the 1970s and it's about the days Duke, a "Doctor in Journalism", spends in Las Vegas with Gonzo, his lawyer and friend, covering two different events; the script is adapted from a book by Hunter S.Thompson. Now I have never taken drugs, so I have to ask: do people really go bat-crazy like that? Do they hallucinate worms, monsters and do they react like Duke and Gonzo or is it an exaggeration? The scenes in the hotel room (Gonzo in the bathtub, the morning after the Andrenichrome binge) plus the ethereal scene in the carrousel, are all pure madness, showing a level of creativity and craziness that you would never think about, unless you were under the influence of drugs.

Of course, not all of the movie was like that. We do get moments of slight lucidity, where Duke or Gonzo try to act normal, or be the voice the reason- they support and take care of each other when the other is high....well, they're both high all the time, so when one is hallucinating and the other is not, to put it more clearly. The film doesn't have a clear direction and it is random, in most aspects- I actually don't even remember the ending...weird.

The way Terry Gilliam approached the book and made the film was very interesting and crazy, yes, but appropriate and close to the reality (I presume), while still making it funny and entertaining. He uses bright colors, psychedelic music and weird angle shots to portray a wild era in America.

I loved the random cameos throughout the film, like Tobey Maguire as the hitchhiker, Cameron Diaz as a reporter, Mark Harmon, Craig Bierko as Lacerda (where did this guy disappear, I used to see him in a lot of movies growing up), Flea- FLEA from the RHCP :), Christopher Meloni, Christina Ricci and a gorgeous Ellen Barkin.

Fear and Loathing in Las Vegas is pretty special- from the characters, to the cinematography and editing, to the story and feeling of it- everything is a little bit surprising. It is definitely a memorable movie and you should see it!