After seeing the SuperBowl trailer of Avengers, I got interested in the movie, so I decided to check out the two movies I didn't get to see last year in order to welcome Avengers with open arms and good knowledge of the characters and story.

What I can say about both movies is that they are both entertaining and clearly popcorn movies, without serious story or character development (the closest to that was Loki, but more on him later). It was fun to watch, and I was surprised to notice how easily I relaxed and just enjoyed myself- I also felt like my mind was somehow shrunken and all I could say was Cool, wow or Awesome- call it the Superhero effect!

Overall, I do feel Thor was much better than Captain America, and I am now excited to see The Avengers.

First up to watch was 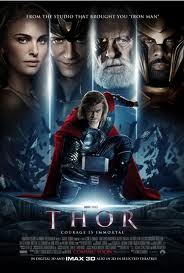 Directed by Kenneth Branagh (surprisingly, considering his classic and Shakespeare background) and with a script penned by Ashley Miller, Zach Stentz and Don Payne, the story is based on the comic books about Thor, the god of thunder. The powerful, but arrogant Thor (Chris Hemsworth) is cast out of the fantastic realm of Asgard by his father, Odin (Anthony Hopkins) and sent to live amongst humans on Earth, after acting foolishly. His younger brother, Loki (Tom Hiddleston) takes advantage of the situation and through lies and devious actions, he becomes the king of Asgard. The story follows not only the growth in character of Thor (in a too-fast paced development of it), but also Loki, who casts aside his insecurities and his jealousy of his brother for the moment and sets out to do greater things.

Maybe it was the fact that I have a soft spot for Brits or maybe because I usually find more interesting the villains of a story, but for me, Loki was superior in every way- his character was stronger and more fascinating, but I think it was Tom Hiddleston who made it stand out. I could really see and understand the changes he was going through, and most importantly, I empathised and still felt the connection with Loki, although he was set out to be a villain. His character was approachable, likeable and although I didn't approve of his actions, especially when it came to his brother, I knew where he was coming from. Also, his powers are very cool- I would have shape-shifting, astral projection, telepathy and teleportation over Thor's magic hammer anytime. I love Hiddleston and I can't wait to see him in Avengers.

Chris Hemsworth definitely had the look and the attitude of Thor, but I wasn't impressed or touched by his performance. I don't think Natalie Portman was right for the job and maybe it was just me, but I felt she over-acted, if that is a word, in most of the scenes. Kat Dennings was great and she brought a much needed fun factor to the movie, and everything Stellan Skarsgard does is good and on the mark, so I was convinced.

As any superhero movie, I had plenty of special effects and fight scenes to sink my teeth in and I wasn't dissapointed. They were visually attractive and dynamic and I was surprised to see how good the directing was, considering Branagh's background, but he did something different, yet very beautiful.

For a popcorn movie, it's one of the best I've seen in a long time and I think you will enjoy it, as well!


Second in line was 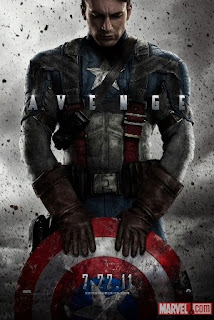 Directed by Joe Johnston, with a script by Christopher Markus and Stephen McFeely, Captain America: The First Avenger tells the story of Steve Rogers, a man who, after being deemed unfit for military service, volunteers for a top secret research project that turns him into the Captain, a superhero dedicated to defending the USA's ideals.

This one doesn't have too much going for it, but I do have to applaud the casting. Chris Evans is perfect as The First Avenger, and I love Hayley Atwell much more than Natalie Portman, as a character and an actress. Other great supporting roles are filled by people like Stanley Tucci (this man is in almost every big movie in Hollywood every year, but doesn't get half the credit he deserves), Sebastian Stan (as the sidekick), Tommy Lee Jones, Dominic Cooper and, of course, Hugo Weaving, as the main villain, Red Skull. 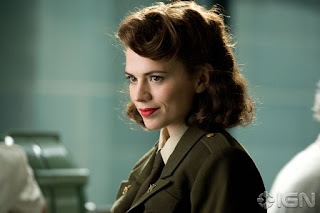 I'm not saying it is a bad movie or that it isn't entertaining, it's just not as good as the other Marvel movies. Maybe it's the over the top action sequences and fights, maybe it's the clicheeic and predictable script and dialogue, or just the usual combination of superhero elements that the viewer is already getting tired of. Either way, I wasn't that impressed.

I do think that Captain America will get more interesting in Avengers, because of the team dynamic and it's superior director, screenplay and so on, that's why I am willing to give it a shot.

Like I said before, Thor beats Captain America by a mile in a superhero duel, but I can't wait to see all of the Avengers on screen in May- now that's a Superhero/Popcorn movie!

Did you see these two movies? Which one did you enjoy most? Let me know in the comments!