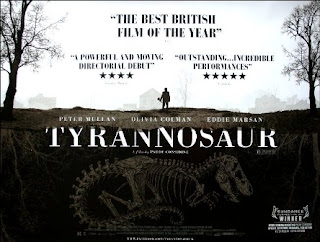 A couple of days ago, I had the pleasure of seeing Tyrannosaur, the directorial debut of Paddy Considine, a talented British actor, known for his In America role. After the screening we were lucky enough to have Paddy and Olivia Colman, the lead actress, for a Q&A, but more about that later.

This film is considered to be one of, if not the best feature of British cinema in 2011. It tells the story of Joseph(Peter Mullan), a lonely and angry man who crosses paths with Hanna (Olivia Colman), a religious woman who suffers from domestic abuse (her husband, James, is played by Eddie Marsan).

We first see Joseph getting out of a bar/club, swearing and kicking evrything in his way, including his dog. He continues displaying his anger throughout the movie, going in and out of it, but we can always see a hint of regret, a flicker of humanity in him; he is a tormented man, who needs affection- he is constantly looking for a companion, even if it's his dying father, his much younger neighbour or the lady from the charity shop.

When Hanna comes into the his life, not judging or asking weird inappropriate questions, he feels relieved, but is also strangely attracted to the kindness of the woman. They both are, after all, messed up souls, looking for love, attention and safety. As expected, the two grow closer, but it isn't because of love- their connection is formed based on tragic events. I won't go into details, I 'll just say that, later on, the movie had one of the most dramatic and disturbing scenes I've seen lately, and it "hit" me, and probably others, as well, so hard, because of the sense of reality it displayed. It was sad, but you knew that it could happen to anyone, and it is, actually, happening right now to women all around the world.

Performance-wise, it is fantastic- Peter Mullan and Eddie Marsan are both forces of nature and deliver gut-wrenching performances (especially Eddie Marsan), but Olivia Colman is the one who shines. Her vulnerability, her desperation, everything about her portrayal of Hanna is spot on and very touching, giving a lasting impression on the audience.

Paddy Considine did a proper job with the directing and writing, especially the latter, as the movie script is one of its strong points. It had a very realistic feel to it and set a dark mood, starting with the lighting, sets and costumes, all the way through the dialogue and scenes. Special mention to the music and sound editing part, as it was remarcable and very good.

Tyrannosaur is a wonderful dramatic movie, that I highly recommend!

The Q&A after the screening started with roaring applause for the director, and especially for Olivia Colman, the lead actress. It was very informative and entertaining. Considine is a great guy, a straight-forward, no-bullshit kind of guy, who didn't have a problem saying "Fuck you Cameron" in response to a question regarding the prime minister's latest declarations. He talked about the idea for the script, his interaction with domestic abuse and how it all started, the fact that it was cronologically filmed in order to help the actors and so on. Olivia Colman is one of the sweetest, nicest women in the business and talked about the way she prepared for the role, how she got it, the time spent on set and gave us more details about the dramatic scene I was telling you about earlier. She even gracefully said a few words about her Bafta snub, although she didn't seem to upset about it at all.

Overall, it was a great experience- thank you Prince Charles Cinema! No publicity, I still had to pay for my ticket, but the cinema really is something else, I suggest you go there sometime!