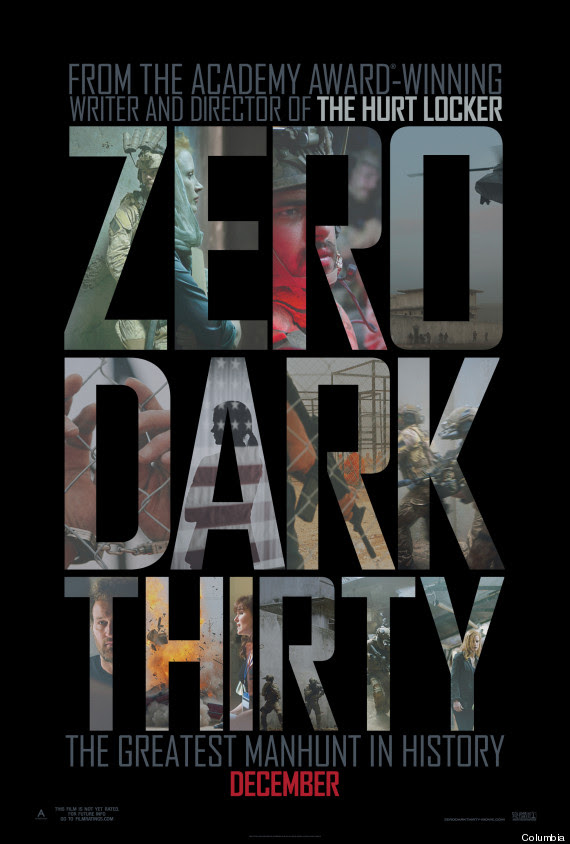 Zero Dark Thirty is a 2012 production, written by Mark Boal and directed by Kathryn Bigelow, of Hurt Locker fame. It tackles the subject of the post 9/11 efforts to capture Osama Bin Laden, all through the eyes of Maya, a determined CIA agent who follows her instincts and never gives up on her topic of investigation, the Abu Ahmed courier, who eventually leads them to Bin Laden.

Where do I start? Zero Dark Thirty is a movie that caused controversy in the US, because of its use of torture- I won't dwel  on that, it's not something that bothered me. What I personally didn't like, or better say, didn't identify with, is the actual theme/storyline. It's hard to relate with a story that you didn't witness or live yourself, especially if it involves national politics. I am not saying I don't sympathise with it, I just don't regard it that as highly as Americans do. The only point in the film that really moved me was the actual raid in the middle of the night, and as far as acting goes, I understood and liked more the soldier roles than Maya's, for example. Speaking about her, I often wondered: what is her motivation after all? Why is she doing this? Patriotism? Lost friend/familly member? I just don't get her- is she a smart woman? or just a very ambitious, stubborn one? Is that last scene in the airplane an evidence of her being happy to accomplish a decade worth of work or finally being able to put behind Bin Laden? And I know you will probably say, well, the story is not about her, it's about the war against terrorism and so on. But if you are right about that, than the script didn't actually portray that well, either.

After the film was over, I remember thinking and actually writing on Twitter that I consider Zero Dark Thirty to be a foreign film, in the sense that it is based on a story/feeling that not most can identify with. It showcases American patriotism- it works for them, the citizens of USA, like Lincoln does, but not for the rest of the world, because of the cultural and environmental differences. Americans used to make universally liked films; this is not one of them and I really don't think it will appeal that much to non-americans, no matter the level of interest for politics and knowledge.

Filmmaking-wise, I wasn't impressed- it was a very well made movie, but nothing was outstanding. I never was a Bigelow fan- Hurt Locker did nothing for me, and I didn't get the whole buzz around her and her directing style; Zero Dark Thirty isn't any different, either, at least in this department. The camera is often shaky, and the cinematography was a bit off, in my opinion.

In contrast to that, the casting for Zero Dark Thirty was remarkable. Jason Clarke was a personal favorite, especially in the first part of the movie, and both Kyle Chandler and Mark Strong did a great job as CIA executives trying to do the right thing, all whilst fighting bireaucracy and uncertainty. As for Jessica Chastain, what can I say? My first impression was: "what is so special about Maya? why is she getting rave reviews for this part?", and I still maintain my opinion that the role is not visibly awards- worthy, but the more I think about it, the more I do see some subtleties in her performances. Still, come Oscar night, I am rooting for Jennifer Lawrence.

So, is it worth it? As I did for Lincoln, I would recommend it just to be aware of all nominated films, but otherwise? Not really- it's a see and forget type of film, at least it was for me. Sorry!
Posted by Diana at 1:47 PM