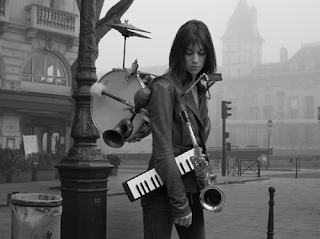 On the 19th of July, I had the pleasure to see Charlotte Gainsbourg in concert at the Somerset house in London- a wonderful location in the heart of London, with the stage placed inside the building walls, in the courtyard.

The opening band, which started around 8 15, was interesting enough, although it wasn't received that well. The 2 sisters and brother, playing guitars and drums, had an erratic set ranging from angry death threats to lullaby songs. The vocalist, one of the sisters, was a rather dark and angry soul, but the other girl, the drummer, was amazing- my eyes would always go to her.

Charlotte came on at 9 30, accompanied by Connan Mockasin and 4 band members, all wearing white. The atmosphere was pretty relaxed- most people chose to just watch and enjoy the music, although there were some crazy fans who kept screaming her name, making weird sounds, entertaining the audience, indirectly. By the way, the audience was very interesting, a little different from the people you usually meet at a concert. It was mostly formed by people over 25: some French, a lot of mature couples, with the occasional 20year old hipsters with a cigarette attached to their lips; I think most of them were there out of curiosity, just like me.

The concert itself was very good, as Gainsbourg proved to everyone that she's not just an actress wanting to sing, but a woman who loves music and who just happens to be good at it. You could also see her father, the famous Serge Gainsbourg, helped and influenced her more than she would realise, especially from a musical point of view- some songs were his, others were covers, but most were influenced by him and that era. I admit I wasn't very familiar with her songs beforehand, but I thoroughly enjoyed myself for the 1 hour and half. Most of the songs were extremely well performed, vocally and instrumentally, with the help of her fantastically funny and spontaneous band, who would basically do whatever they wanted, including singing laying down on the floor or dancing with a beer in hand during the performance. Highlights were 'Heaven can wait', the 'Ashes to ashes' Bowie cover and Jamais; check them out on Youtube or Spotify.

All in all, I wasn't impressed or blown away with the concert, but I did have a good time and I will certainly come back to visit Somerset House, which is a fantastic building.
P.s. Did I tell you I saw Jim Sturges at the concert? Yup, celebrity sighting. Nice looking guy, down to earth and friendly. I didn't talk to him, I am not the type, but I saw him being greeted by some fans and he was very nice to them.

NOW, I want to know about your concert experiences. Which was the best one you've ever been to? Who are looking forward to see? Please let me know in the comments
Posted by Diana at 6:30 PM