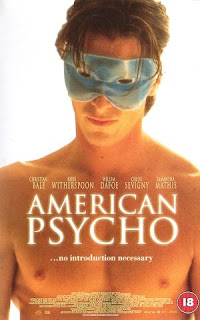 (that's actually my DVD cover, not the original poster- I like it more)

[SPOILERS]
To celebrate the 4th of July, I decided to finally see American Psycho, a movie based on a great book by Bret Easton Ellis, directed and written by Mary Harron, about a man who leads a seemingly perfect life, but actually has a horrifying secret that makes his day to day routine much harder. Even before it started, I knew I was in for some crazy shit, since you can't avoid the online pictures of a wild Christian Bale.

He plays Patrick Bateman, a 27 year old who works in an advertising company and recently became a VP. At a first glance, nothing stands out. He has a great job, a group of friends around him (Justin Theroux, Josh Lucas), a girlfriend (Reese Witherspoon) and he affords going out and having fun every night in clubs and restaurants. But as things move along, you observe little details about him and his personality that make you reconsider.

Here is where you start analysing him, and honestly, my review will probably be that, since the character Bale portrays shines throughout this movie. One of the first things I noticed is the obsession with details, that most likely has to do with his need for power- you see it in his overreaction to business cards, or in his daily beauty routine. I think it's just a way of controlling a part of his life that he understands and has access to, unlike his nightly adventures that are beyond his control. When it does begin, his moments of rage don't last long- two or three quick swings, shots, in the most brutal and horrible way possible, and then he is done...back to his normal, restrained self.

This leads to a confession that explains a lot to us: he has no emotions, with the exception of greed and disgust, adding that"something horrible is happening inside of me and I don't know why". It's obvious by now that he is a serial killer and that he can't and won't stop.

He carefully plans his escapades and when his infatuation with Paul Allen (played by Jared Leto, who was, apparently, huge in the 90s) goes to the highest level, he deals with him the only way he knows, but this time, things don't go as planned and for the first time, the police are on to him. I found it funny that the detective (Williem Defoe), is the one who manages to get a normal reaction out of him, since Bateman starts acting erratically and making everyone suspicious.

The end is crazy and I was left wondering what just happened, especially when his lawyer says that he met with Allen twice in London- I kept asking myself, or my imaginary friends, what did he mean? Was it all in Patrick's imagination? It's obvious the guy didn't believe the wild phone call (btw, brains?), but.....Allen, alive in London? Overall, I liked the fact that it left the audience wanting more, it makes the film even more memorable, although I do wish I'd know what really happened. One of his last quotes describes his character, the story and the possible follow up perfectly: "My pain is constant and sharp, and I do not hope for a better world for anyone. In fact, I want my pain to be inflicted on others....my punishment continues to elude me, and I gain no deeper knowledge of myself. No new knowledge can be extracted from my telling. This confession has meant nothing."

American Psycho is quick, irregular, with no emotions, just like Bateman's personality and behaviour. It's nicely made and it moulds around the character, as he is the star. There are some funny tibdits in the film, maybe intentionally put to relieve some of the tension. The classic "I have to return some videotapes", or his weird, but interesting obsession with music, since he talks and interprets lyrics and songs before having sex or, actually, before the craziness begins. I also have to mention the fact that Bale looked amazing in this film- very fit, beautiful skin, nice haircut (for that era), I think that guy would have made a fantastic Christian Grey nowadays.

Yes, American Psycho is a crazy movie, with a great character- development story and a fantastic performance by Bale that you definitely have to see.
Posted by Diana at 2:37 PM