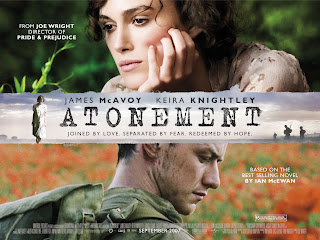 Based on the best selling novel by Ian McEwan, Atonement is a 2007 drama directed by Joe Wright (Pride&prejudice, upcoming Anna Karenina) from a screenplay by Christopher Hampton. It tells the story of a young couple who separate in tragic conditions, as a misunderstanding sends him to prison, but never give up on each other, as he desperately tries to go back to her, even if it costs him his life, since he is forced to join the army.

Keira Knightley plays Cecilia, the woman who shares a complex, yet passionate connection with Robbie(James McAvoy), the housekeeper's son. Their love and sexual gestures are misinterpreted by Briony (Saoirse Ronan), Cecilia's younger sister, who childishly believes the man is a sex maniac after she reads a private letter, and that assumption leads to her accusing Robbie of a terrible thing after an incident in the house. The second part of the movie concentrates on her miserable life, as she now understands the consequences of her actions and very much so regrets what she has done. The finale is bittersweet, but realistic and shows us two different endings, both happy and sad.

My personal highlight of the movie was the filmmaking quality of it. I knew from the first frame and scene that I am in for a treat, because it was masterfully shot, from the trail of miniatures figures leading to the little girl, to the revelation of miss Briony Tallis. Seamus McGarvey was in charge of the cinematography and did an absolute fantastic job- I loved everything about it: the colors, the close-ups, the speed and motion of the camera, everything. My two favorite scenes are worlds appart from each other, but both visually and emotionally perfect: first, when Cecilia and Robbie are getting ready for dinner (their anxiety, fear, love, the way the camera moves from one to another), and second, the portrayal of the ending of the war on the beach in France, the shots following the three men while they discover what has happening. I also liked the fact that some of the most important parts, story-wise or character-wise, were showed from two points of view: Briony's, and then the lover's one; it helped give more depth to the script and show different sides of the coin. Last, but not least, let me mention the sex scene in the library, which was surprisingly sensual and intense and very sexy. 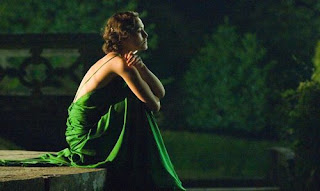 The cinematography helped make the sets and costumes seem perfect and realistic, and I think it's safe to say that we can always expect beautiful visuals and art direction from Wright. The score was also a highlight for me, especially the innovative typewriting inspired instrumental, or the piano or the beating on the car.

As for the acting, considering the fact that it featured some of the best British actors in the industry, you can expect it to be brilliant. James McAvoy was just dreamy, with his impossible blue eyes and sweet charm, while Keira Knightley did a good job, although she was a little stiff for my own liking. Saoirse Ronan was a standout and you could see she was a star in the making, with her big eyes, remarkable face structure and composed attitude. Nice to see Theon there (Alfie Allen, an actor from Game of Thrones), and of course, the one, the only, mister Benedict Cumberbatch, who portrayed Paul Marshall in a creepy, het convincing way.


Atonement is very good film that deserves your attention, even if just for the visual aspect of it. If you like drama, British actors or love stories, you are in for a treat. Check it out!
Posted by Diana at 12:48 PM