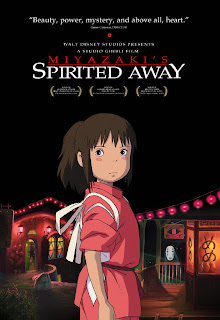 Spirited away is a 2001 Japanese animated fantasy-adventure film written and directed by Hayao Miyazaki and produced by the famous Studio Ghibli.

It tells the story of a young girl who moves to another city with her parents, but on her way to her new house, gets trapped into an alternative reality, full of spirits and monsters. She quickly meets a boy who protects and guides her through the new world, which is basically a bath house for the spirits. She gets a job, by signing a contract with evil Yubaba who changes her name to Sen. Things get complicated when she lets into the house a monster called No Face, who causes trouble, and when Haku comes home wounded and followed by Zeniba, the twin sister of Yubaba. Sen must fight to save the bath house employees and the boy, and soon embarks in a journey that forms friendships and helps loved ones.

I must say I was mesmerised by Spirited Away- it is my first Japanese animated film seen, and I loved it, not only for the beautiful graphics or the enchanting storyline, but also for its heart and courage. Sure, in comparison to present day visual effects, the film is not perfect, but the animation has something that most visually-concentrated movies don't, and that is magic, because it breathes emotion and it captures your attention and heart with little effort. The direction is on point, and I very much liked the score, which flooded almost every scene, using a lot of orchestral pieces that give a natural flow to the animation. Two favourite moments I have to mention, for their majestic visual, directorial and editorial efforts: the chase and the fall of dragon Haku whilst being followed by Zeniba, and a following one, with Sen, as she takes a ride to the woman's house with her new found friends.

The alternative world, full of spirits, monsters and mystical creatures, was beautifully created and I loved it, although some scenes, especially towards the end, weren't actually children-friendly. My favourite characters were Lin, the boiler room man, his little spider helpers and Zeniba. (quirky, overly analytical observation: rather sudden change of the twin sister between her time at the bath house and the way she is in her home, wouldn't you say?)

To continue the overly critical behaviour with every film I watch, I have noticed something I didn't quite like- you're probably going to be surprised, but I was a little underwhelmed and bored of the cliche and overused storyline of coming of age, with a weak young woman, who transforms herself into a powerful, fearless lady who is willing to risk her life for her friends. Plus a knight in shining armour type of characters, villains and new friendships.Does this sound familiar? Fairytales, comic books, young adult novels and so on. Yes, I am the first to admit I still fall for these kind of stories, but I don't know why, here it bugged me, maybe I have seen too much of them lately or maybe I just needed a reason to not score it 100%, because otherwise, the film was mostly perfect. I especially liked the ending, which although some might say it was predictable, for me it was incredibly sweet and emotional (I am talking about the flying scene, but also the one where he leads her back to her parents).

Spirited away will definitely be regarded as a classic and a film that everyone should see. It is one of the most successful movies in Japanese history- it overtook Titanic in the national box office and ended up winning an Oscar for Best Animated feature and the Golden Bear at Berlin Film Festival.

I hope, actually urge you to see Spirited Away, if you haven't already, for its peculiar style, the world and the characters Miyazaki created, and for its simple, yet appealing beauty and emotion.

Which other animation/Studio Ghibli/Miyazaki productions do you recommend?
Posted by Diana at 3:20 PM