“They don’t even know what it is to be a fan, ya know? To truly love some silly little piece of music, or some band, so much that it hurts.” 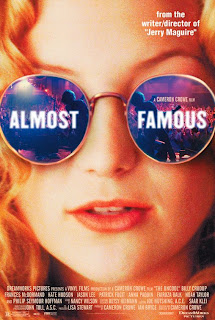 Almost Famous is a 2000 film, written and direction by Cameron Crowe, who based the story on real events and people. It's about a smart, precocious 15 year old who is contracted by Rolling Stone to write an article about Stillwater, an upcoming band, and goes on tour with them, taking part in an adventure that he will never forget.

Now, before I start, I must admit I am in a rather artistic stage in my life right now- I listen to a lot of music, am discovering new and classic artists and obsessing over some bands, so you may think I am biased here, but I'l try to be as objective as I can. That being said, I loved the movie- let's start with the small details: the written intro credits and use of chipmunks song; Michael Angarano as young William; Phillip Seymour Hoffman as the rock critic/mentor; amazing soundtrack featuring songs like Tiny Dancer; a handful of quotes that I wrote down and probably will remember for a while (my favourites: "I didn't invent the rainy day man, I just own the best umbrella" and "Your mom kinda freaked me out").

Then we move on to bigger things. First, a good script, full of funny, but approachable characters, entertaining dialogue and good character development. It may seem predictable and cliche, but maybe it isn't, maybe that's how things really were back then- the guy did actually go on tour with a band. I liked the delay of Russell's interview, the back and forth between him and Penny, and especially the near plane tragedy. I think that the movie accomplished in showing the audience that not everything is nice and cozy and fun on tour; people still lie, cheat, dream, hurt and use each other, just like in the real world- this one is just more fun to be in.

Second, how can you not love the cast? Patrick Fugit as William is adorable and perfect for the part. Kate Hudson, in probably her best role ever, gives the right amount of sweetness, sexiness and mystique to Penny Lane, and the interaction between her and Patrick's character was very sweet. He sees her as a goddess, and you may think it's a sexual or love attraction, but I think it's more than that- she is the free spirit he longs for...or maybe it's just a crush. Who knows? Moving on to my absolute favourite person and character- Frances McDormand as the overly protecting mother who freaks everyone out; that woman has so much charisma and talent, I am always intrigued and attracted to her, she steals the show every time she is on screen. Billy Crudup was also very good as the mysterious lead guitarist who often outshines Jason Lee's character, a funny, wacky frontman who entertained me most of the times ("you know what I do? I connect"). Props for Jimmy Fallon and his hilarious part, who's look I just couldn't stop laughing at.

Third, and last, with the risk of repeating myself, here are some quotes I just loved:
"Hey man, don't stop there, I am incendiary, too"
"What's your real name?"
"It's ok, I am easy to forget, I am only the lead singer"
"But here I am, telling secrets to the one you are not supposed to tell secrets to"
"Your mom kinda freaked me out"
"I'm always home, I'm uncool"

Overall, the film was very entertaining- fun and sweet, with an exciting pace that didn't bore. The sets&costumes were good and as I said, the soundtrack was memorable. Almost Famous is a wonderfully written, beautifully directed, well acted film, that you definitely have to see.
Posted by Diana at 10:46 AM