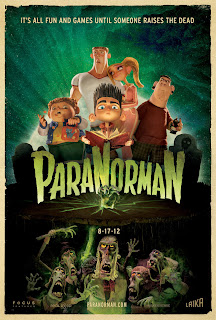 Bucharest has, from time to time, some very cool events, and one just started a couple of days ago: Animest, an international film animation festival. The event's premiere on the first day was ParaNorman, a Laika studio production. Written by Chris Butler and directed by him and Sam Fell, it tells the story of a kid who can see and talk to ghosts, for that being considered a freak in school. Things get complicated when a weird old man entrusts him with the vital task of stopping the witch's curse over the town.

ParaNorman turned out to be a fantastic film, one of the best animations I have seen in a long time- might even crack my top 2012 film choices, and that is surprising, considering I don't particularly like animated movies.

Let me tell you why you should see this. First and foremost, it's extremely funny most of the time, and that we can "blame" it on the script, a definite strong point of the film: its lines and hilarious situations make you laugh out loud. Moving on, we also have a lot of action, some scary moments, and great, lovable, down to earth characters, with slightly exaggerated traits to make it more funny. Mix that with fantastic visuals, dynamic direction and an appropriate soundtrack and score, and you've got yourself a hit.

I enjoyed this much more than Frankenweenie- maybe because of the use of colors (as opposed to F, which was Black&White), or because of the much funnier script, with the more realistic and hilarious characters, but overall, in my eyes, ParaNorman is a class above Frankenweenie, not to mention much more entertaining than the Tim Burton film.

Please go see ParaNorman, I think you will like it!
Posted by Diana at 9:19 AM