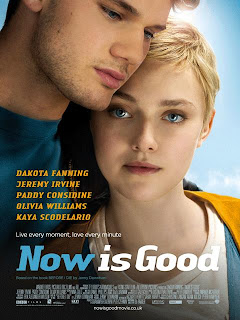 Now Is Good is a typical teenage movie based on a novel by Jenny Downham called Before I Die, about a 16 year old girl with leukemia who decides to give up on treatment and live the little time she has left. She makes up a list of things, wild things she wants to do, including sex, stealing and taking drugs and sets out on a journey of accomplishing them, together with her friend Zoey (Kaya Scodelario) or her brother, Cal. Of course, a hot boy enters the picture, Adam (Jeremy Irvine), and things get complicated.

Now, the cancer story has been done quite a lot in the recent years- 50/50 is the first to come in mind, but I am sure there are others, too. The problem lies in the fact that Now Is Good doesn't accomplish what 50/50 did: it doesn't move you emotionally, it doesn't show a different side of the story or new, unusual reactions. This film follows the classic, and I am mean classic in the sense that it is the classic way cancer is portrayed in movies: girl is depressed, takes it out on the parents or friends, although they are not to blame for. She does stupid things and refuses treatment or help because she thinks they pity her, and so on. Adam coming into the picture already gives you an idea of how things will follow (they fall in love, they don't want to let go of each other, teenage angst...you know the drill). Please don't think that I am underestimating or not understanding the effects and problems of cancer- I know these things actual happen in real life and I am not trying to criticize the story, but I think they could have done it better.

Take A Walk to Remember- it still gets me to this day. Maybe it's the actors, maybe the script, maybe the sad, although some might say, cliche ending. Still, I always cry at the end of it and I will always want to re-see that film (it's kind of my Notebook). But Now Is Good fails in that department and it's a shame, because the book is ten times more effective and emotional, especially the ending, which had me bawling my eyes out when I first read it. By contrast, the film didn't: when the credits started rolling, I said to myself "ok, nice movie, when do I have to be in X place?".

Filmmaking wise, I don't really know what to comment- nothing stands out, good or bad about most aspects. I do have the mention the soundtrack and score, which are pretty good.

As for the casting, I quite liked it. It featured a rather convincing Dakota Fanning (both in accent and acting), and a very pretty, but not quite there yet Jeremy Irvine- he plays his part, but it just seems so amateurish, I don't know, I wasn't convinced, but then again I can't say anything bad about him either. Maybe it's the script, maybe I'm too picky. Just forget about it, he is handsome and does his job. Paddy Considine is a wonderful actor that, despite the idea and the script, did a fantastic job in portraying a father desperately trying to somehow save his daughter from an imminent death. Him and Olivia Williams, who plays the mother, are the standouts, acting wise, of the film and once again, prove their worth.

In conclusion, I wouldn't warmly recommend Now Is Good, especially if you don't like romantic comedies or teenage movies, although it isn't a bad movie to say so. As you might have guessed, I wasn't overly excited about it, but I think I let the book raise high expectation for the film. It was a good adaptation, but it just didn't hit the emotional level I was expecting. If you ever have a choice between this and A Walk to Remember, got for the latter.
Posted by Diana at 11:33 AM