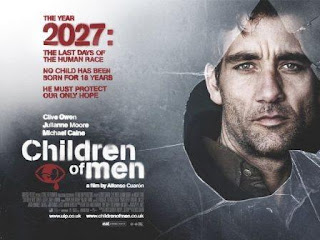 Children of Men is a 2006 dystopian film directed by Alfonso Cuaron and adapted for screen from a novel by P.D.James. It features Clive Owen in the part of a lost, sad man who is suddenly thrown in a world of conspiratorial events and death, but also hope and survival. It is definitely one of the best films of its genre and deserves all the praise and attention it has gotten.

The premises is simple, yet tragic and heartbreaking: in the year 2027, the world is facing chaos, death and violence, but especially infertility, something that has left the Earth population in a grey, unhappy and with no ounce of help state of mind. Theo is contacted by his ex wife and asked to help transport a refugee, Kee, who proves to be much more precious than expected. The end is both positive and negative, and leaves a bittersweet taste in your mouth. The script has a very interesting concept, with a great mix of drama, love, action and existential themes. That's actually one of the films' strongest points: its ability to create a dystopian world without overreacting or relying too much on sci-fi or science. Children of Men talks more about people, the evolution of mankind and relationships, and less about new technological developments or unseen gadgets, and that gives it more soul and ultimately, impacts you on a much deeper level.

Alfonso Cuaron is perfect for this type of movies. He has a very dynamic shooting style and that works here, especially in the running scenes. There are many details that I loved and appreciated: the blood on the camera, the close-ups, the shaky camera in some points. The dark cinematography complemented the direction very well, as did the sets.

The casting was probably one of my favorite things in Children of Men. Clive Owen in one of his career's best parts- he gave an amazing performance as the sad, miserable man who finally finds a reason to live and fight, 20 years after the death of his son and separation from his wife. He has always been a favorite of mine and I always wonder why doesn't he get more roles, or better ones, to say so, considering this performance and the one in Closer. Another standout was definitely Michael Caine as the wacky, adorable old Jasper, and of course, Julianne Moore also impresses in her short time on screen. One mention I have to give is to Oana Pellea, the woman playing Marichka, the gypsy  who is actually Romanian- when you were hearing her talking rubbish in a weird language, that was actually Romanian. It was quite cool for me to recognize that- she is a loved and appreciated actress here.

In the end, Children of Men is definitely a must see for all film lovers and dystopian aficionados. Very well made, visually appealing, wonderfully acted and with existential themes like hope, survival, love and humankind, it is highly recommended.
Posted by Diana at 4:52 PM