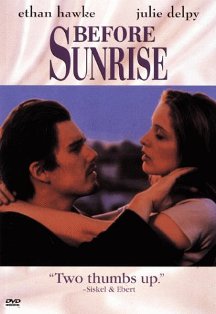 Jesse and Celine meet on a train, have a quick chat and then decide to spend the rest of the day and night in Vienna- this without even knowing each other's names.

It may seem strange and maybe, a little bit stupid or dangerous, but it isn't, not in this case, anyway. Their stories, adventures, conversations, the way the look at each other, how they kiss and laugh- everything is realistic, mostly believable and you can't help falling for them and their story.

Jesse is an American, a rather pragmatic, simple, yet very introspective guy, who wants to get away from his problems and himself, whilst Celine is a beautiful French woman, a dreamer, but a fighter, a seeker (like the palm reader says), who looks at the world with different eyes, and always surprises you. You don't instantly see the connection or the attraction, but it is there and, while they are somehow opposite from one another, they still find a way to relate, more easily then you can imagine. It's so interesting and nice to see a relationship form and evolve, and their interaction is so sweet.

One of my favorite things about this movie was the dialogue or the conversations Jesse and Celine had. Some where funny, some were very serious, others were just a way of getting to know each other better (come on, the first thing you ask a girl when you want to know more about her is "What were your first sexual feelings?").

Top 3 scenes of Before Sunrise
1. The fake phone call to their respective best friends
2. Sound booth at the record store- I just loved the tension between them , the way they awkwardly look at each other, not knowing what to do
3. The good bye- the slight desperation of both of them at the thought of not seeing one another; it was sweet and endearing

Overall, Before Sunrise is a very good romantic film that you should see. Now, I am very curious to see how their relationship will evolve in Before Sunset and how will they react when they see each other after a long time. 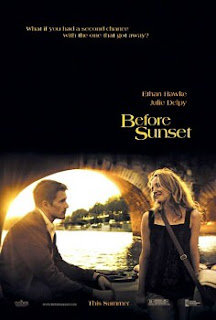 This one wasn't as romantic as the first one- they have matured, they have changed, in some predictable ways (Celine is now an activist for environmental rights), or rather interesting ways (Jesse is a writer, married with a kid).

The focus of the film is no longer on the romance or the first-time aspect of a relationship, but on love, loss, time, feelings and desires. They are not discovering each other, they are trying to reconnect and see if the flame is still there- and it is.

Ethan Hawke and Julie Delpy have the same chemistry, but of course, more relaxed and subdued, as time and wisdom do that to most people. They talk about life, the world around them, but most importantly, they talk about their past and their present, and that is the most interesting part of the story.

You, as a viewer, don't reconnect with the characters that easily, at the beginning; maybe it's the changes they have gone through, maybe it's the awkwardness between them, so it takes a little time to adjust. I, personally, thought Celine was a little bit neurotic and whinny at some points, but that's just the way she is.

By the end, you realise that they have two things in common: they never forgot that night in Vienna, and the present doesn't bring them happiness. The movie takes you through different stages, up and down, like a rollercoaster.

At first, you see the obvious changes in both of them: Celine is more outgoing, more pragmatic and fierce, while Jesse is more relaxed and more optimistic, trying to find the good in everything- it seems like that night changed them forever, each one getting the other's main quality or dominant feature. But, as time passes, you can see that Celine still dreams of passion and love, while Jesse is still very much aware of the world around him and what is good or bad- they just chose to bury it and focus on more important things- Celine, on her job, Jesse, on his responsibility for his son.

At first, it seems like Celine has put that night behind her and moved on, even forgetting details of their encounter, just trying to minimize the effect he had on her. But, yet again, it is proven otherwise: she still longs for the way Jesse made her feel that night, she has never forgotten him, nor will she.


Top 3 scenes of Before Sunrise
1. The discussion in the car, especially the last part, where Jesse talks about his dreams
2. The song Celine performs for Jesse
3. "Baby, you are gonna miss that plane" "I know"

The second one does not have the charm or sweetness of the first one, but it excels in some ways the first one didn't, digging more into the characters and their motivations. There are many layers and feelings that should be shared, but I don't want to give out too much. You really do need to see both of them, one after the other, to appreciate the whole story. I really enjoyed it, and I think you will, too!
Posted by Diana at 8:51 AM