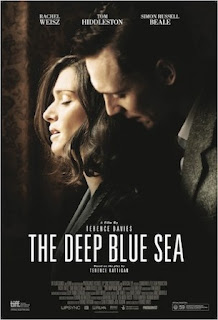 The Deep Blue Sea is a character-driven movie, more or less. It doesn't focus on story development or action, it just takes us through the life of a couple and its complicated relationship, told mostly from the perspective of the woman, Hester Miller, the wife of a British judge, who starts an affair with Freddie Paige, a Royal Air Force pilot.

It begins with a 10 minute, orchestra music-fulled sequence, back and forth between the present day, where Hester, wonderfully played by Rachel Weisz, tries to comitt suicide, and the old days, when her relationship with Freddie was still fresh and lustful. From the beginning, the viewers can easily observe the beauty and darkness of the cinematography of Florian Hoffmeister, and the intricate, yet dreamy and classic direction of Terence Davies. I still remember a stunning scene which shows the lovers sharing a sweet moment in bed- the music, the way their arms and legs were intertwined, the movement of the camera-it all felt a little sureal and dramatic, and I loved it. I also liked the fact that the movie wasn't very predictable: I thought it was going somewhere, and then it completely changes, moving towards a different direction, and I am instantly intrigued (a good example is the subway scene).

She fails her attempt of taking her life, but still goes back from time to time to her past, her new, exciting, full of love past, that she now longs for. It all started with the need of a better life, one in which she wasn't bored or treated so insensitively, and Freddie just happened to be there to sweep her off her feet; it didn't hurt the fact that he was closer to her age than William, her husband, more than 20 years her senior.

But in the end, nothing in life comes easy and that is what the movie is about. She knew what she was getting into, she knew he couldn't offer what she really wanted, but Hester can't stay away, and chooses to be miserable for some time, in order to have at least a few moments of pure happiness and excitement with Freddie. She does have a chance at tranquility and love, not with Freddie, but with someone who will care for her, but she refuses, all just to hang on for a little while longer of the inexplicable connection and love to Freddie.There are clear differences between them and they both know their relationship is messed up and it probably won't last, but they still come back to each other. Case in point, after he finds her suicide letter, he leaves, but still agrees to come back to pick up his things, after she pleads to him numerous times.

The performances were good and higly comandable, but not extraordinary. Rachel Weisz and Tom Hiddleston are great individually, but I didn't buy their connection 100%- but still, the effort is there and the acting is good, especially for what the script requires. That, plus the music, editing, directing, cinematography, costumes, sets- everything fit the genre and the topic very well. It's clean!

I will be honest with you and say most will probably not like this- they will find it boring and useless. But for the few who like character-driven movies, romance, complicated relationships- this is a movie for you to see! I thought it was beautiful!
Posted by Diana at 1:56 PM