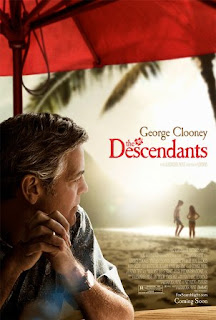 I had low expectations going in to see The Descendants- the trailer and the synopsis suggested an Oscar bait (like others noticed), George Clooney kept winning awards for a role that didn't seem that complicated (and taking away recognition that should have been for Michael Fassbender's performance in Shame) and its general heavy coverage just set me off, I wasn't keen on seeing it.

But I did and I was wrong- The Descendants is a fantastic movie. Although I still do think it is an Oscar bait, I have to say that I was impressed and moved by the story and the performances. George Clooney and Shailene Woodley shine in this Hawaiian drama about a broken up family coming together after the mother's accident.

I really liked the metaphor that Matt used at the beginning: "My family seems like an archipelago. We are part of the same group, but we are still islands- separate and alone. And we're slowly drifting apart." He is right and that is the perfect way to describe the situation at the beginning of the story. Certain details emerge as we move along and new complications stir up the quiet life of the island, but overall, what is so appealing about this movie, is the fact that it's realistic- this can happen to anyone; what makes it even better is the character development and the storyline: nothing is forced or too dramatised; you can believe it.

There's one moment in the film where Alex tells Matt that her mother was cheating on him- that specific scene and his genuine reaction to the news made me realise that the awards coming Clooney's way are not for nothing- I loved his performance, not only in that part, but overall- sometimes, like I said before, playing a real, normal, simple character is harder then portraying a crazy man. Better than Fassbender in Shame? Not really, but I wouldn't mind if George did won!

The Descendants has some beautiful, yet very simple filmmaking elements that make the movie even better: the use of hawaiian music, the cinematography, the clear, steady shots, the scenes where they capture the human expressions, letting us know and understand how the characters are really feeling (Alex crying in the pool, Matt realising the truth in the restaurant, Elizabeth's father saying his last goodbye and so on). The script was very good and it had some wonderful, touching scenes, like the one where Sid talks to Matt about his family, or the moment where the three of them say goodbye to Elizabeth and so on.

You will find some discrepancies in the storyline: where did Elizabeth's best friends go? How did the cousins react to Matt's decision regarding the land- and what was the purpose of this part of this storyline, anyway? Plus, the sudden mood swings for dramatic effect are a little out of line in some points, but then again, I didn't think they dramatised the story or the characters too much, it is mostly realistic.

Yes, overall, The Descendants is a good movie, a drama that you will find touching and learn to love as the story progresses. Watch it on video-on-demand or buy the DVD, I think it's worth it!