Saturday Night Live(SNL) is an American late-night live television sketch comedy and variety show created by Lorne Michaels (courtesy of Wikipedia). Running as a TV show, with about 25 episodes per year, it is one of the oldest in American television, with over 37 seasons. It has featured the best actors and musicians from the last three decades and it is considered to be one of the best and sought-after TV gig by the entertainment industry.

SNL has its own type of humour and if you have to like it and get it or else you will find it stupid. If you liked Bridesmaids, you might like SNL, as the style is similar in some points.

-Some of their most popular sketches were developed into movies, two clear examples being The Blues Brothers (1980) with Aykroyd and Belushi, and Wayne's World(1992) with Mike Myers and Dana Carvey.

-Andy Samberg launched his "musical" career by forming a group with best friends and SNL writers, Akiva Schaffer and Jorma Taccone, called The Lonely Island; their skits/musical numbers are used at least 3 or 4 times during the season. Examples: Dick in a Box,

The structure
Every show starts with what is called a COLD OPENING, a segment with no introductions, just a 5 minute sketch to get loose; it's usually a monologue and most of the times political, and very rarely the best part of the night.

After the main character finishes by saying: "...and live, from New York, it's SATURDAY NIGHT!", it's time for the host monologue, which almost always involves a song in one form or another. There are few funny, memorable ones that I remember, but at least it's a way of getting to know the person better, as most of the time they mock themselves or a recent situation they have been through.

Then you watch 3 or 4 sketches, with some short fake commercials inbetween, and after the first performance of the musical guest, we get to the Weekend Update, a regular part of the show where Seth Meyers (the head writer and once regular player/actor of SNL) talks about the week's main stories (mocking them, of course). Now, I love this part of the show not only for mister Meyeres, who I think is great, but also for some great guests that appear from time to time, like the fantastic Stefon (Bil Hader).

2 or 3 more sketches, the second musical guest performance and we finish with 1(sometimes 2) final ones, the last shot having the host thanking the musical guests, special pop-ups throughout the show and the cast&crew. 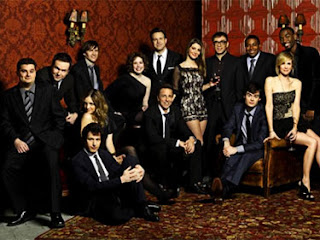 Hosts
As I said, there have been at least 37 seasons of SNL, so obviously I haven't seen all of the shows, but from the last 3-4 years, amongst the best (in my opinion) were: Emma Stone, Justin Timberlake, Jon Hamm, Alec Baldwin, Melissa McCarthy, Jimmy Fallon, Jason Seigel, Jesse Eisenberg, Amy Poehler, Tina Fey, Maya Rudolph (previous players of SNL always make great shows when they are invited as hosts).

-What up with that?- Kenen Thompson plays a soulfull presenter of a TV show with a catchy tune (I always sing it with him), great dancers (Jason Sudeikis kills it everytime), 3 guests- Lindsay included (the man who always shows up, but never gets to talk) and impromtu, weird appereance by characters that shouldn't be there. Some don't like it, I think it's funny

-Stefon talks about the coolest place in New York! Just watch it- it's hilarious!


-Bronx Beat- a daytime talk show with Beety (Amy Poehler) and Judi (Maya Rudolph) just bitchin' about life- the latest one got me laughing many times!


-J-Pop America Fun Time Now- this is a rather new one, just started this year, but I love both Taran Killam and Vanessa Byer, and I think it's funny, most of the times!


-Jeunes in Paris- the first one had Emma Stone and Taran Killam (last season) dancing and fighting on a cool, catchy tune in a French bar, and it was the best out of the 4 shown so far, although the 4th one, with Jean Dujardin, is very close to overcoming it!


Memorable (and some of my favorite) sketches


-Being quirky with Zooey Deschanel- The Michael Cera and Mary-Kate Olsen impressions are funny!

-Nicolas Cage x 2 on Weekend Update (this is a recurring part/guest of W.U, but this time it has the actual Nicolas Cage)-- Couldn't find a video, sorry

- The Charlie Sheen show- with special guests John Galiano, Moammar Gadhafi, Lindsay Lohan - if interested, here's a link- not the best, but the guests are interesting http://www.ebaumsworld.com/video/watch/81358349/

Again, the fake interview between her and Katie Couric (Amy Poehler) was better, but no video!

-Justin Timberlake and Andy Samberg- Dick in a box


- Jeunes in Paris- I personally love the first with Emma Stone, but I couldn't find a full-length one, so here is just a 30 seconds preview.


There are a lot more, but these came up in my mind when I wrote this, plus I couldn't videos for some! Sorry for the bad quality, Youtube is the only source!


It's not always good, and some jokes are horrible, but for me, it's pure entertainment; when I need something simple, normal, relaxing to watch, just to unwind from university and problems, I watch this or 30 rock or How I met your mother.

Do you watch SNL? what are your favorite sketches? Let me know!