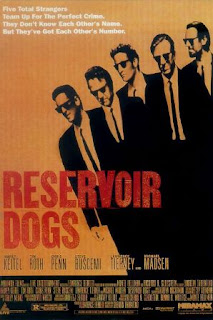 Writers: Quentin Tarantino, Roger Avary (background radio dialog)
Stars: Harvey Keitel, Tim Roth and Michael Madsen
First scene, first discussion. Topic of choice? What’s the real meaning of the song „Like a virgin” by Madonna. Characters? The Reservoir dogs.
I don’t know much about mister Blue, but let me tell you more about mr White, mr Pink, mr Orange, mr Blonde, mr Brown, and let’s add up to the equation Eddie and Joe.
5 guys are contracted by Joe to do a job, and by job I meaning robbing a store for diamonds. The heist obviously goes bad and from there on the movie unfolds. In typical Tarantino style, you have bold characters, loud, with big egos and not as much to say. You also have, as usual, interesting storyline, but with big holes that never fill up- this is one thing that bugs me about his movies. Those mishaps don’t bother, they aren’t essential to the storyline, but it makes you wonder and I think some of them would make the movie go on more smoothly. Because it isn’t a walk in the park and it doesn’t have the normal pace: it goes back and forth, before and after the robbery.
Mr White, a low key, but very involved and all-to-the-heart type Harvey Keitel, gets a soft spot for Mr Orange, the very young Tim Roth who is a surprise character (I won’t spoil). Mr Pink, the big mouth, big ego, big attitude, small Buscemi, is somewhere in the middle, trying to figure out what happened, and Michael Madsen, the cool, Marlon Brando, I-will-kill-you-in-a-heart-beat type just adds more fuel to the story, but gets the same ending as mr Blue (a very brief appearance) and mr Brown (Tarantino).
All in all, it’s a typical Tarantino movie: great characters, nice music, cool attitude, but overrated and lacking in storyline. Do I recommend it? If you are a movie buff, sure, go for it. Looking for a Saturday night movie? Neah, go try something else and leave it for another time!
Posted by Diana at 8:44 PM