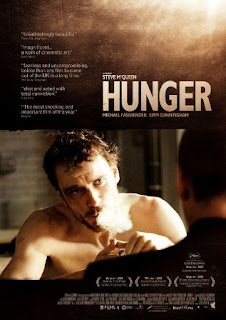 Director: Steve McQueen
Writers: Enda Walsh, Steve McQueen
Stars:  Michael Fassbender, Stuart Graham, Laine Megaw and Brian Milligan
„I have my belief. And in all its simplicity that is the most powerful thing”  Bobby Sands
This tragic movie is just the story of a man willing to die for his beliefs, unable to determine the right or right thing to do because of the hate, oppression and conditions he was put through the years.
Michael Fassbender, as the political prisoner who decides to go on a hunger strike, portrays the character in such a way that it conveys all of the emotions and sorrow and despair of a true victim of this kind of situation. It was so real and moving, that it took the already amazing direction, cinematography and sound to the next level. He gave one of the best performances.
But the real star of the movie, for me anyway, was Steve McQueen- his directing style is so good, original and I love the fact that he knows how to emphasize every important aspect of the story in a subtle, yet moving way. Every shot and angle had a meaning, every little detail had its purpose; to give an example, I loved the scene where one of the prisoners receives a new cell- you can see his fear, feel it in his breathing.
Another aspect I liked, although it is unusual and not suitable for every movie, was the fact that it had no music, or very little- here, it brings out the story much better, the tragedy and the importance of it.
Hunger also delivered two, actually three, of the most disturbing scenes I have ever seen: the check up for hidden objects, the shooting scene(just for the surprise element) and the starving process of Bobby Sands (Fassbender had to loose a lot of weight for it and I can only imagine how difficult it must have been mentally to portrays this state of mind)- I won’t go into details, but trust me when I say it was shocking.
One more thing I would like to talk about- dialogue. This movie, as unusual as it is, in many ways, doesn’t really have dialogue, with the exception of one scene. A priest comes into the prison, trying to change Bobby’s minds about the hunger strike. And from that point you have 20 minutes of one the best dialogue scenes I have seen- one angle, two actors, with no cutting- brilliant. The angle shot changes after 20 minutes and you can really see, for the first time, Bobby Sands, with his fears, his beliefs, his passion.
All in all, it is a great movie and I highly recommend it. But you have to be in the mood for it- it’s not an easy one, but it’s worth it!
Posted by Diana at 7:55 AM