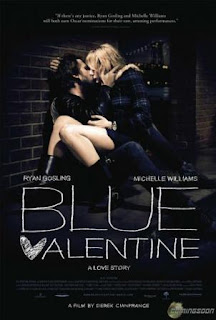 Blue Valentine was one of those movies that I love....the ones whose centre is the character.

Dean and Cindy, the two protagonists, show us their story, going back and forth into their time together. I love the way the script makes those connections between the past and the present so smooth, so meaningful, tying the loose ends together.

During the award season Michelle Williams as Cindy got the better reviews and the acknowledgement for her work, but in my opinion Ryan Gosling just stole the show. He is absolutely fantastic as a young guy, with no bigger plans than just have money to eat and smoke, until he founds Cindy. The way he interprets his part is flawless...it’s not acting, well, it doesn’t seem that way. It all feels so natural, so normal, even the little gestures, like the way he plays with his daughter Frankie. He just proved to me he can do anything and I can’t wait to see more of him.

For some, it might get a little boring, as it doesn’t really have enough action, but the story is so wonderfully told, that I personally loved it. I have to repeat myself and say that the one of the most important things that makes this movie great is the normality of it all, the realness. Like, for example, the scene where Dean makes Cindy listen for the first time their song...it’s not digitally put in the scene, you can hear as if it is played on the stereo.

It is a great film! I recommend it!

What did you think? Who was better: Ryan or Michelle?