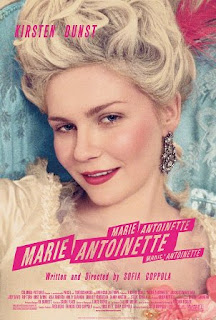 If you have seen a Sofia Coppola movie, I think you can know what to expect. Very well directed and with beautiful cinematography, but the storyline is always so slow and uneventful (her „masterpiece” in this area is „Somewhere”), that it tested my patience in so many moments, especially in the first hour of the movie. I didn’t knew it was her work until halfway through the movie, when I remembered the film Somewhere and then the fact that she directed this one, and it was obvious. Sometimes, the visual is enough to capture the audience, but not this time. It all seems so interrupted, butchered, nothing really flows, and by that I reffer to the transition between scenes.

As I said, visually everything is perfect; the costumes and sets are wonderful and you can’t help feeling that french nostalgia and immediately wish to be there, eating a maccaroon with the queen. Kirsten Dunst plays her part wonderfully and it’s nice to see familliar faces like Rose Byrne or Tom Hardy.

But in the end, it didn’t cut it for me, it had many highs and lows and if i had to choose, overall, it would be stuck on the middle, not bad, but not sensational, either. Maybe it’s just me, I don’t really enjoy Sofia Coppola’s movies.

p.s. I just got my London Film Festival tickets! I will be seeing Restless, Carnage, Take Shelter, Martha Marcy May Marlene and I really really hope to get into Shame- I will be queing for that one!
Posted by Diana at 12:53 PM