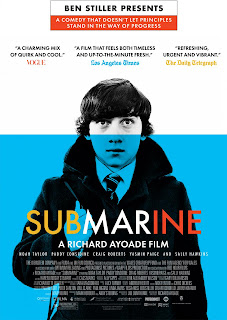 Written and directed by Richard Ayoade, Submarine is a film based on a novel by Joe Dunthorne, about the trials and tribulations of a young man who has to deal with love and parental issues. It's a rather dark movie, that deals with depression, fear, death, separation and loneliness, but it somehow shines because of its actors' performance, the sweet, awkward vibe of it and the beautiful way it treats the delicate themes.

Oliver Tate, wonderfully played by Craig Roberts is a shy, introvert 15-year old who is in love with Jordana, a fellow classmate. After he finally conquers her heart and begins dating her, problems in the family start arising, as a former flame of his mother stirs up trouble in the couple's life. We witness a series of funny, but also sad and miserable scenes in which Oliver tries to cope and fix all of the problems the best way a young boy can. Split into three parts, the last one, representing the show down, is the most interesting one, as his desperation on New Year's Eve night to find his mother and "save her" shows us the most emotion we've ever seen him display, and it is moving and unsettling to see.

Although the overall feeling is a dark and deep one, there are several scenes that are awkwardly sweet and funny: the imagining of his funeral, the first conversation he has with his father about love and relationships, his preparation for Thursday night lovemaking, or his desperate act of revenge against the man. As dark and secluded Oliver is, we still care and sympathise with him, and so viewers are constantly rooting for his happiness and success in resolving his problems.

One of the things that made me love and fondly remember this movie are the characters, which are created and portrayed in such an unusual, yet very appealing and entertaining way: from his adorable mother played by the genius Sally Hawkins, to the crazy Graham Purvis (Paddy Considine, with the coolest haircut ever), and his often annoying, but in the end, sad and misunderstood girlfriend, Jordana, all have a certain something that distinguishes them from all typical characters you see in comedies or drama, and I really appreciated that.

Another strong point is the music, as all the song were written and performed by Alex Turner, of Arctic Monkeys fame. I think the soundtrack definitely improved the overall atmosphere and feel of the movie, especially in some parts, like the scene where Oliver reads Jordana's letter, puts his father cassette on and lies on the bed, as it crumbles, with the voice of Alex Turner on the background.

Submarine is a rather typical British movie- dramatic, sometimes a little bit bleak, but with a quirky sense of humour and mountains of talent and quality of filmmaking. Although it ended on a high note, I still found it to be at times depressing and dark. Still, Submarine is a good movie that I recommend!

P.S. If you liked Moonrise Kingdom and its style and humour, I think you will enjoy this, as well- I found a lot of similarities between these two, but maybe I'm wrong.
P.S.2. Ben Stiller, wtf?
Posted by Diana at 9:46 PM