My first experience at the London Film Festival was wonderful! It all started when I walked into the NFT1 room in the BFI, which is probably one of the most beautiful theaters in the world (everything was impeccable, clean, very well arranged, big red curtains and comfortable seats). After that, at precisely 15:30 two gentlemen introduced the movie and then it was time to see the extra part of the experience- Trip to the moon, the 1902 silent film of Meliers, in COLOR! As I was not familiar to the genre, I was looking forward to the film that was restored this year by a Spanish organization. It was very interesting and you can see the parts that were originally colored and the ones that were digital, but still, it had an amazing quality to it. The story centers around 6 men who go to the moon; first, they prepare, then they leave in a special capsule; have their adventure  on the Moon and then they are forced to come back! The actual adventure is a little weird and creepy and it might be one of the first signs of science-fiction in a movie, but still, very well done for that period of time. An interesting twist to it was the fact that it had a soundtrack, to say so, and that was the music of Air, who fitted perfectly to the story! 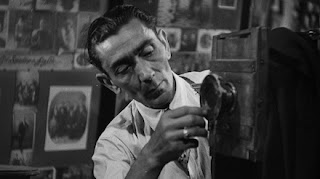 On to The machine that kills bad people! This rarely-seen film of Robert Rossellini was a very pleasant surprise! I loved it and if you have a chance to see at a festival, please do! They reminded us that it was considered to be a lost film and that they put a lot of work into it- and it is worth it! The story is pretty simple: a man discovers (with the help of a certain character that will be revealed at the end) that his photographic machine can kill the people it photographs. So, for example, if he would photograph a picture of his cat, the animal, in real time, would take the exact position in the picture and die. Now, I know, it might sound creepy and stupid, but trust me, it was a very delightful, playful and funny film, with a special meaning to the story! I can't really explain everything that was shown without giving away too much, but I can advise you to look out for it! It was a special experience for me and I will remember it!

Tomorrow I will try to get in to see either Shame or 50/50, so look out for the review on Sunday morning!

Hope you enjoyed it!

Email ThisBlogThis!Share to TwitterShare to FacebookShare to Pinterest
Labels: 1902, 1948, A trip to the moon, BFI, London Film Festival, Meliers, Rossellini, The machine that kills bad people