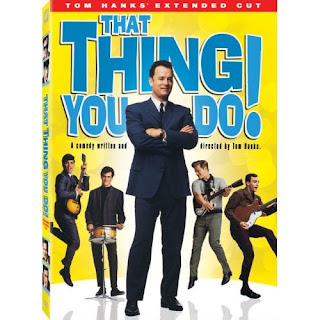 I saw this 1996 comedy, written and directed by Tom Hanks, a long time, on TV, and loved it, for its characters and story, but most of all, for its song, which I still like. Actually, that was the reason I decided to watch it again- I came across 'That Thing You Do' and I said to myself I have to see it again. The film tells the story of a young 1964 band who suddenly comes into the spotlight, as their song becomes a hit all around the country.

The script is simple, sweet and catchy. It doesn't aim to be an award-winning one, but it does want its viewer to be entertained and happy. There are a lot of great scenes, full of energy and youthfulness, like the one when their song is put on radio for the first time, or the screaming girls at the back door exit. It makes you smile, dance and love the characters, but it does also feature moving scenes and back-to-reality moments, as the band falls apart and realise they fell into the trap of the one hit wonder curse.

Speaking of casting, I loved it- you had everyone from Steve Zahn as the wacky guitar man, to the sweet Ethan Embry as the bass player and Tom Everett Scott as Guy Patterson, who is an obvious Tom Hanks wannabe in the making- that being said, he was very charming and played his part very well; I wonder what he's doing now, I haven't seen him in a long time. I have a small crush on Liv Tyler, so of course I liked her character, and I have to mention two fantastic cameos: Chris Isaak, as Uncle Bob, who helps them record their first song, and Brian Cranston..aaa, yes Brian Cranston- it's a very brief moment, you might have missed him, I did, the first time I saw the film, but a couple of nights ago, I literally screamed his name when he appeared on screen.

Just to remind you what the fuss is about, here is the song you can't get out of your head, the one that was nominated for several awards, including Golden Globes and Oscars:


You may not like That Thing You Do like I do but you should  give it a try next time you need to see something light- It's always an easy distraction and a very enjoyable one.